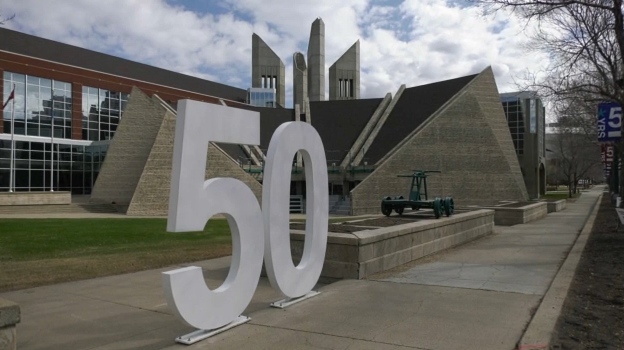 To help commemorate 50 years of academic excellence, MacEwan University created a time capsule to be opened in 2071, when the post-secondary institution will mark 100 years of operation.

The time capsule contains items highlighting the resilience of students and staff through the COVID-19 pandemic and recognition of the world around the university and what academic life in 2022 looks like.

Some of the items include a MacEwan University branded facemask, a COVID-19 immunization record, hand sanitizer, and an Every Child Matters t-shirt to recognize Canada's first celebration of Truth and Reconciliation Day last year.

Also included are a Ukrainian flag and a gold medal from the Griffons women's soccer team's historic win in November, which was a program first for the university.

"Our 50th anniversary is such a huge deal," said Myles Dykes, president of the Students' Association of MacEwan University (SAMU).

"I think it really starts us thinking about what are our next 50 years (will) look like," he added. "We are all excited for what's to come."

MacEwan opened its doors in 1971 as a community college. The downtown post-secondary was named after John Walter Grant MacEwan, a farmer turned academic who became an Alberta MLA and the province's ninth Lieutenant Governor.

"Through the time capsule, you see some items that really signify the resilience of people these last couple of years throughout the pandemic, the economic recession, and most recently, the Russian invasion of Ukraine," Dykes said. "It just really allows us to reflect on what's been and acknowledge that resilience but also celebrate what we've been through and what's to come."

Revealing the items in the time capsule was part of the 50th anniversary celebrations on Friday and Saturday. Other events included a pancake breakfast, alumni tours, musical performances, and the unveiling of a new mosaic created by staff and students.

In 1993, the students' association at MacEwan created a different time capsule that was opened last year. Inside it contained VHS tapes, floppy discs, student handbooks and club posters, as well as dot-matrix printouts of student lists.

"It's a really exciting time," Dyke added. "Just in the past couple of years there's been so much going on, so I hope when they open this (next) time capsule in 2071 they see the joy and resilience of the people today."