One man dead after shooting at Red Deer Walmart 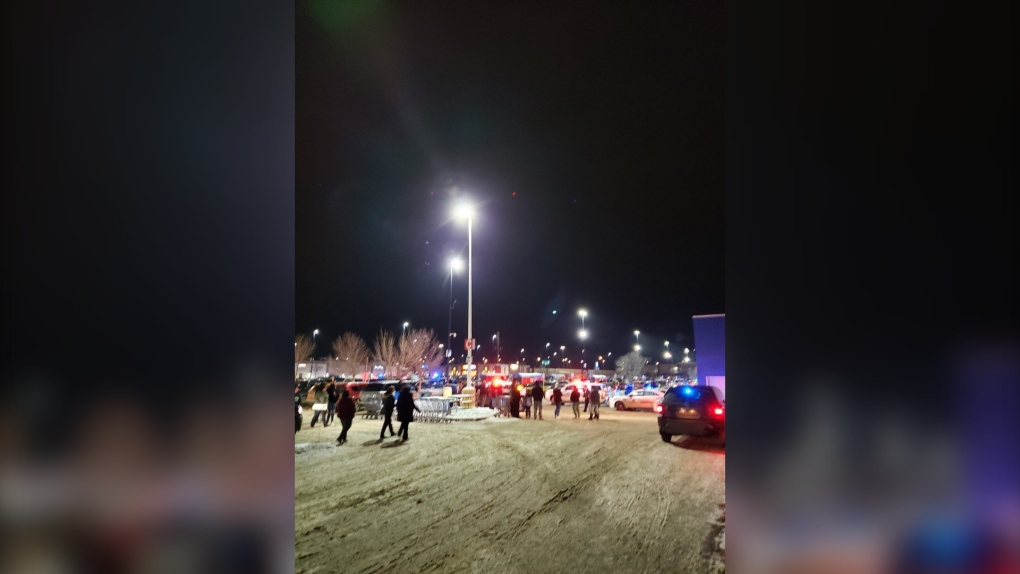 A photo posted to Twitter shows a heavy police presence at the south Wal-Mart in Red Deer, Alta., amid an ongoing incident. Dec. 20, 2019. (Twitter/@buddhacanvas)

RED DEER -- Alberta RCMP say one man has died and suspects are at large following a targeted shooting at a Red Deer Walmart.

The 69-year-old man was shot in the entrance to the Walmart Superstore in the city's south end at around 6:45 p.m. Friday. He was rushed to hospital with a serious chest injury but later succumbed to his injury.

Const. Shelley Mashiem confirmed police were looking for at least two suspects, and local authorities indicated there may be two suspect vehicles involved. She said the scene around the Walmart had been contained and was no longer an active scene.

No one else suffered injuries despite reports on social media that multiple people were injured, RCMP said.

The City of Red Deer asked people to avoid the area while police conducted their investigation.

This evening, a 69-year-old male was fatally shot in what appears to be a targeted incident at the South Red Deer Walmart. The scene will be barricaded as members conduct the investigation. If you have any information on this incident, call the Red Deer RCMP at 403-391-4034.

Red Deer RCMP told CTV News there was no risk to the public.

They said there would be a police presence in the area through the night and into the morning and specialized units were being dispatched.

Kevin Collins said he and his son arrived at the Walmart about 15 minutes before the shooting occurred.

"We were out doing our shopping and we were about to start heading to the tills when they came over the PA system," he said. "Pretty much to the gist of, we have a situation in the parking lot and RCMP are on the scene and they request that everyone stays away from the front end of the store."

Customers were asked to move to the back of the store and stay away from doors and windows, Collins said.

He did not hear any gunshots, he said.

"To be completely honest with you I was confused more than anything," he said. "You go around and you kind of get the same reaction from a lot of the other people in the store, people were kind of looking at each other like 'Did I just hear that right?'"

He said customers maintained their calm while they were locked down in the store for about an hour. Police ushered them out of a back exit at around 7:45 p.m. and those whose cars were in the cordoned-off parking lot were offered transportation by bus back home.

"They were taking things very seriously," he said. "My biggest takeaway from the whole thing was that it seemed to me that everything was handled very well. At no point did me or my son feel like we were in any kind of danger."

There are some traffic disruptions as a result of this police investigation - please follow detours as directed and allow emergency personnel to manage the scene. #RedDeer https://t.co/jQIHumER0b