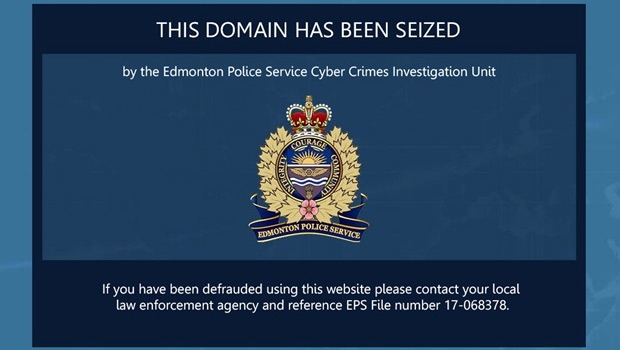 EPS released an image showing what is visible on a domain seized by investigators following an online fraud investigation. Supplied.

Edmonton Police said a .CA domain had been seized, as part of an ongoing online fraud investigation.

It was alleged the information had been stolen from someone who had tried to make a purchase on a website called Fazny.

As the individual tried to make a purchase from the website, they received a number of errors indicating the payment couldn’t be processed – later on, they noticed suspicious purchases on financial statements. The complainant then reported it to police.

Investigators with the EPS Cyber Crimes Investigation Unit determined the complainants information had been stolen on the website – which attracted consumers using ads on Facebook.

After a court order, the Canadian Internet Registration Authority, or CIRA, which manages the.CA domain on behalf of Canadians, allowed officers to seize the domain and redirect it to a server that is controlled by police.

Police are asking anyone who has information about this to call the Edmonton Police Service non-emergency line at 780-423-4567 or #377 on a mobile phone. Anonymous tips can be submitted to Crime Stoppers by calling 1-800-222-TIPS (8477).