'Really scary': Close call, but no injuries in scaffolding collapse

It happened around 5:30 p.m. on Windermere Way SW.

Jhanelle Samuels was driving in to her condo parking lot just as it happened.

"Out of nowhere someone on the balcony must have yelled and said ‘oh my god! Move your car, backup, backup!’ and then I looked over and the thing is literally falling towards my car," Samuels said.

Samuels said she reversed quickly, as a piece of metal hit her cars tire.

"If I didn’t move, it probably would have covered my car," she said. "It was really scary. Really scary."

Samuels was not injured and her car was not seriously damaged, but her husbands Acura was smashed.

It was one of 8-10 vehicles buried under the twisted metal and broken wood. 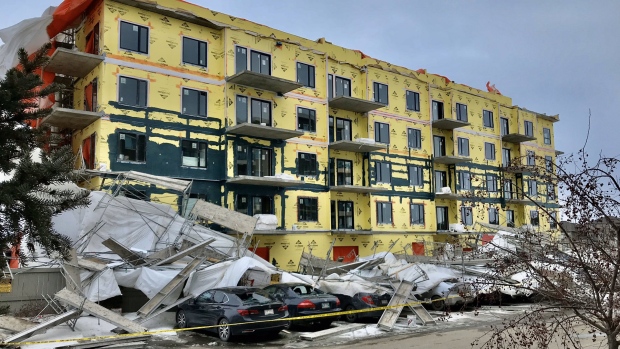 Police and firefighters searched the area and found that no one was trapped or injured.

Don Russick was in the parking lot when it happened

Rissick said he was one of the neighbours that alerted Samuels to backup.

The scaffolding was on a construction site where a five-storey condo was being built.

Police kept Windermere Way closed as scaffolding on the front of the building was still standing, the traps on it torn and blowing in strong winds.

EPS confirmed investigations from Occupational Health and Safety would be involved.