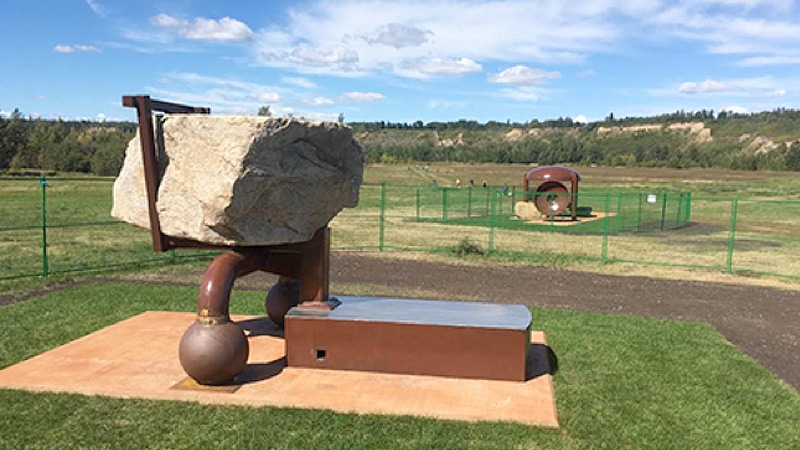 Two pieces in Resonant Progression: Potential and Resonant Point, are seen in a photo released by the Edmonton Arts Council on Monday, August 28, 2017. Supplied.

The Edmonton Arts Council announced Monday that a series of sculptures had been installed at Terwillegar Dog Park, as part of the city’s Percent for Art policy.

The piece is called Resonant Progression, by Edmonton artist Royden Mills – and it has been installed in the off-leash area of Terwillegar Park.

It is made up of three sculptures placed along the path in the park – the sculptures are called Potential, Resonant Point and Beyond Listening.

While each sculpture is physically separated, two of them are meant to work together, with sounds made at Potential amplified at Resonant Point – the third sculpture is meant to serve as a place for reflection.

The installation cost just over $126,400, and they’re part of the Percent for Art policy – funded with one percent of the budget for the Terwillegar Footbridge Construction Project.

The sculptures are made of steel and more than 60 tons of locally-sourced boulders.

The piece has been installed, but crews are still finishing up work at the park and removing temporary fences, an official launch is scheduled for September 17 from 2 to 4:30 p.m. at Terwillegar Park. Musicians Ben Sures and Chris Brzezicki are expected to perform at the free event, hot dogs and veggie dogs will be available to people, and special treats will be available for canines.