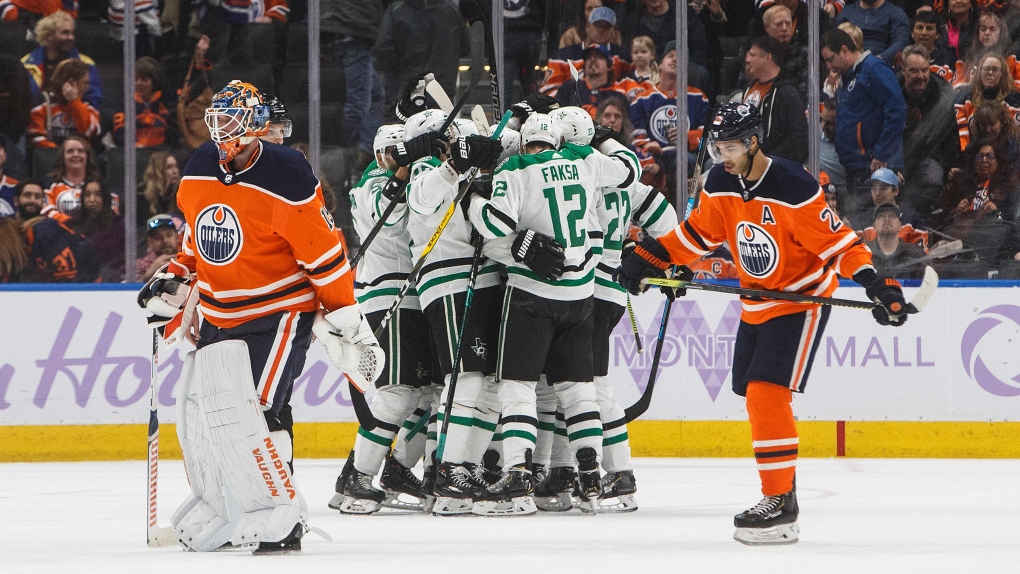 EDMONTON -- The Dallas Stars' Jamie Benn scored the overtime winner against the Edmonton Oilers Saturday afternoon, after the Stars rallied from a two-goal deficit and for the 5-4 victory.

Jujhar Khaira had a pair of goals, whiel Leon Draisaitl and Ethan Bear also scored for the Oilers (13-6-3), who have lost two of their last three.

“Obviously up 4-2 in your own building going into the third, you have to find a way to get two points,” said Oilers captain Connor McDavid, who had three assists in the game. “We let that slip by. They did a good job to come back in the third.

Dallas started the scoring nine minutes into the opening period as the Oilers failed to clear the zone. Dickinson ended up with the puck in the slot, beating Edmonton starter Mikko Koskinen to the glove side.

It only took the Oilers 11 seconds to counter as Khaira won a puck battle on the boards and muscled it past Stars goalie Ben Bishop.

Koskinen stretched out to make a massive glove save on Nick Caamano with six minutes left in the first to preserve the tie.

Edmonton surged ahead with 34 seconds remaining in the first period as McDavid blazed in on the net, with a big rebound coming out to Draisaitl. The NHL's leading point-getter scored his 16th goal of the season, extending his point streak to 12 games. McDavid improved his own point streak to seven games.

Dallas tied the game back up 48 seconds into the second as Benn made a nice feed in front to a pinching Heiskanen for the goal.

The Oilers regained the lead three minutes later as McDavid dropped a pass back to Khaira, who scored his second of the game and third goal of the season. Bishop was yanked from the Stars net after allowing three goals on 15 shots, replaced by Anton Khubodin.

Edmonton made it 4-2 on the power play with just over a minute to play in the middle frame as McDavid made a deft pass to Bear, who had activated from the point.

Dallas came back five minutes into the third as Comeau whacked a bouncing puck into the net.

The Stars kept pressing and were rewarded with 1:49 to play in the third when Seguin scored on a one-timer, his 600th career regular season point.

Benn's overtime point was his first in 16 games, sending home a backhand shot 1:14 into the extra frame.

“I can't believe it went in,” said Benn, who ended the longest goal drought of his career. “There's never any quit in our team. ... We found a way to get five (goals) and it was a great battle back by our team.”

Jason Dickinson, Miro Heiskanen, Blake Comeau and Tyler Seguin also scored for the Stars (11-8-2), who have gone 7-0-1 in their last eight games and have won 10 of their last 12.

“For us to have the confidence, and especially to come back from 4-2, to know you can do it. â€¦ It's something to think you can do it. It's another thing to believe you can do it,” said Stars head coach Jim Montgomery. “And once you accomplish it it's easier to do again and again.”

With files from a report by Shane Jones and The Canadian Press first published Nov. 16, 2019.