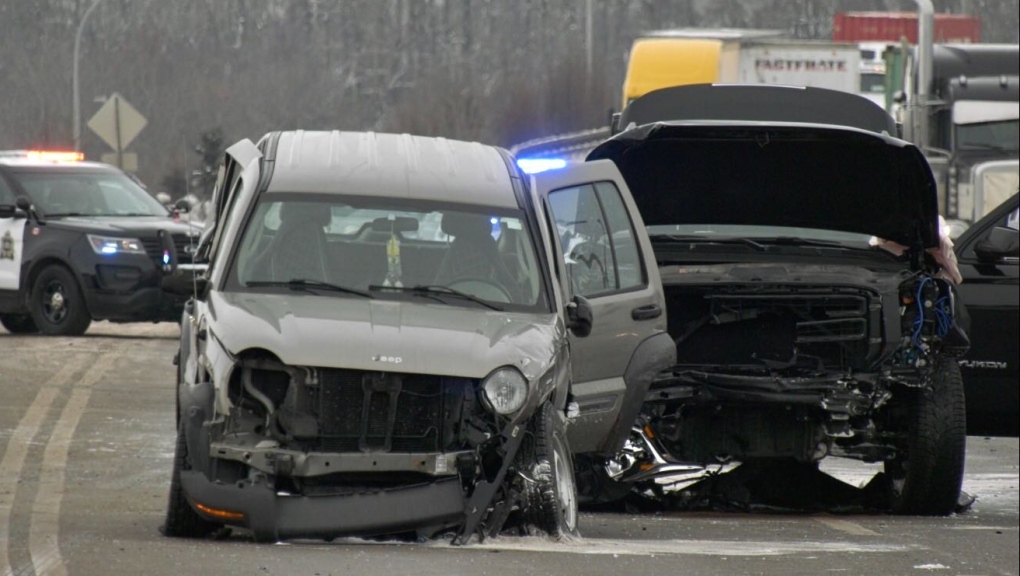 Several people were sent to hospital with minor injuries following a collision involving a semi truck and other vehicles on the Quesnell Bridge. Jan. 20, 2020. (CTV News Edmonton)

EDMONTON -- Emergency vehicles are on scene after a three-vehicle crash shut down the Quesnell Bridge Monday morning.

The crash involved a semi truck, a Jeep and a GMC. Police said two people were taken to hospital out of precaution but their injuries were not serious.

Drivers reported on Twitter that the incident had backed up traffic on Quesnell bridge and Whitemud Drive, with multiple lanes closed. Just after 12:30 p.m., police said the scene would be cleared shortly.

Until then, westbound drivers were being asked to stay far left to avoid the crash.

Witnesses reported seeing a school bus involved in the crash, but police on scene later confirmed the bus had just pulled over for the crash scene.

Yikes that doesn't look good. It appears as though an SUV and a small school bus have been in an accident going westbound on whitemud just before Fox drive. Many ambulances & fire trucks on scene. Drive careful peeps. #yegtraffic #yegweather #yeg

WB Whitemud on the Quesnell Bridge, MVC. Stay far left to avoid. via @CTNCalgary (10:26am) #yegtraffic