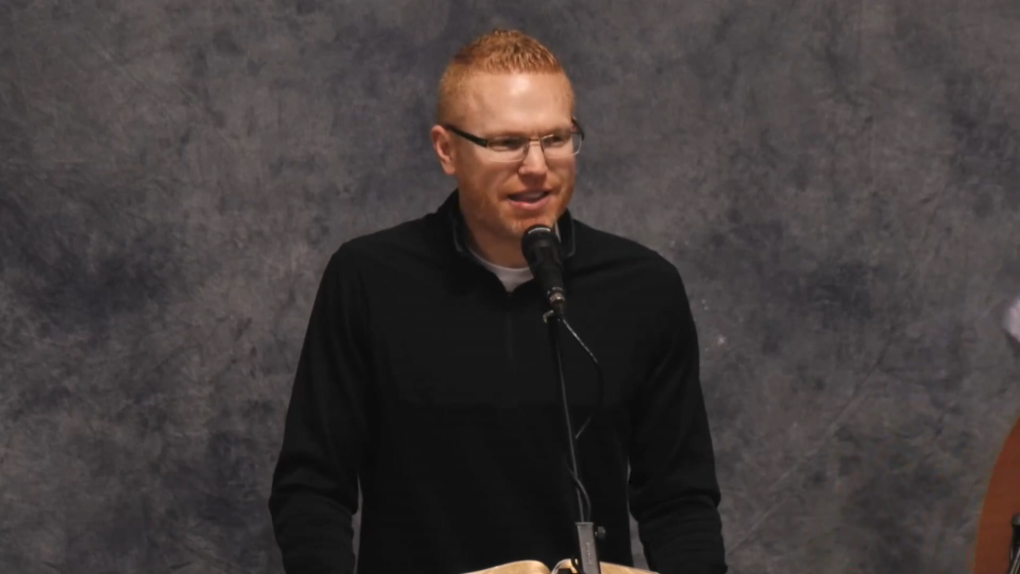 GraceLife Church pastor James Coates speaks in a video of an April 11, 2021, service at an undisclosed location, published to YouTube the next day. (Source: YouTube / GraceLife Church of Edmonton)

EDMONTON -- The trial for an Alberta pastor accused of leading church services in violation of public-health orders entered its second day on Tuesday.

James Coates, 41, testified on the first day of his trial Monday where he told the court the COVID-19 pandemic had been blown out of proportion.

"I don't believe that COVID-19 poses a serious health risk to our people," he told the court, later referring to COVID-19 as a "so-called pandemic."

"The government was capitalizing on the crisis to usher in an agenda that would transform the society as we know it," he said. "The real threat is AHS and its public health orders."

Coates invoked a number of conspiracy theories around COVID-19 testing and "the Great Reset" as well as Premier Jason Kenney's May 2020 characterization of COVID-19 as an "influenza" as justification for ignoring public health rules.

"The government was capitalizing on the crisis to usher in an agenda that would transform society as we know it."

He also made multiple complaints about the difficulty of speaking with a mask on. A member of his legal team, James Kitchen, was the only one in court Monday not to wear a mask, claiming he had a medical exemption.

Coates is expected to continue his testimony Tuesday.

His lawyers admit that he broke health restrictions, but are arguing that the province's pandemic health measures are unconstitutional and intrude on freedom of worship.

The province has had the highest per capita active case count among all Canadian provinces for several months now.

Janine Hanrahan told the court she first inspected the church in July 2020 following multiple complaints by the public to AHS.

She testified to observing a lack of physical distancing and mask-wearing at several inspections, including a church band and choir singing.

Hanrahan said during one inspection, she heard the pastor telling an RCMP officer that Alberta's chief medical officer was a dictator and Premier Jason Kenney was hiding behind her.

She testified that when she inspected the church last December she was accompanied by two Mounties for her protection.

Hanrahan said she made several recommendations to the church's pastor about what they could do to reduce the spread of COVID-19 -- such as signage on the door to remind people about physical distancing, wearing masks and using hand sanitizer.

She also recommended the church have separate entrance and exit lanes for congregants passing through its double doors. AHS eventually closed and fenced off the church in mid-April, sparking protests and driving Coates and his church to hold services in a secret location before posting a video recording online.

Coates was released on March 22 after being jailed for more than a month after refusing to abide by a bail condition to not to hold church services that violated rules over gathering and masking.

The trial is scheduled to continue through at least Wednesday.