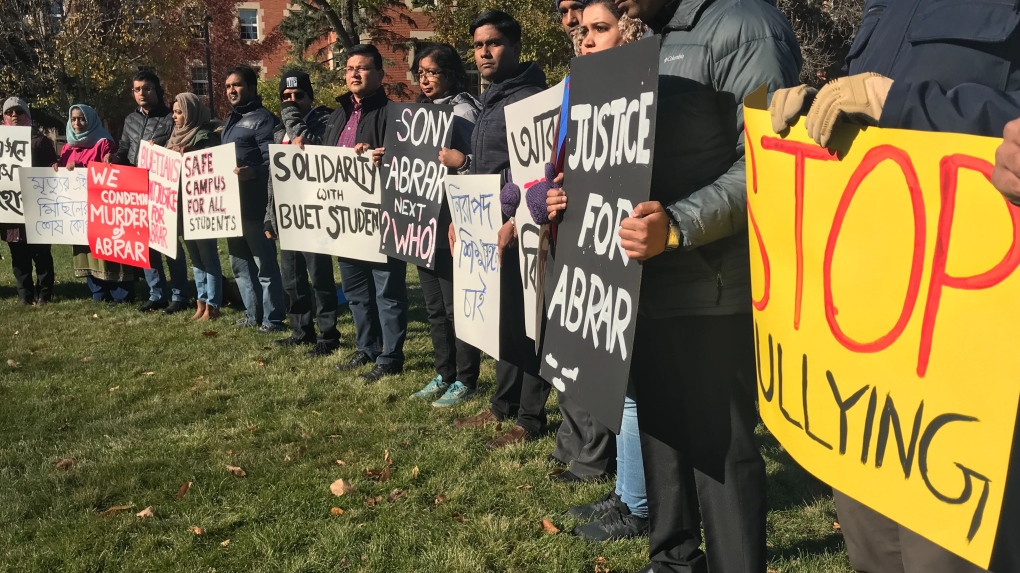 Students at the University of Alberta in Edmonton formed a human chain in solidary with Abrar Fahad, a student at a Bangladesh tech institute who was murdered over his political stance, friends say. Oct. 10, 2019. (CTV News Edmonton)

EDMONTON -- Protesters gathered at the University of Alberta campus Thursday to demand justice in the killing of a Bangladesh student who was killed after he criticized the government.

Abrar Fahad, a second-year-student at Bangladesh University of Engineering and Technology (BUET) was found dead on campus Oct. 6.

Friends say Fahad was beaten to death by fellow students because he criticized a water deal with India made by Bangladesh Prime Minister Sheikh Hasina.

Surveillance footage showed Fahad being taken by a group of students to the room he was found in. At least 11 students said to be loyal to the prime minister have been arrested in connection with the death.

On Thursday, more than a dozen protesters including some from BUET gathered on the U of A quad lawn in solidarity with Fahad, many of them carrying signs with messages like "Safe Campus For All Students" and "Justice For Abrar."

"It is not a safe place to study and because of this incident we came to know there are lots of students, they were victims for different purposes, and they were not treated properly in the dorm," said Mizanur Rahman, president of the Bangladesh Canada Association of Edmonton.

Rahman used to attend the same Bangladesh university Fahad was killed at.

The death has sparked similar protests across Bangladesh and at universities around the world.