'We are treated like kids': Edmonton drops masking after Alberta moves to take away powers

Edmonton councillors immediately cancelled the city's masking bylaw Tuesday, as the Alberta government moved to take away the ability of all local councils to require masks and vaccines in public spaces.

Bill 4 was presented by Municipal Affairs Minister Ric McIver, which would give only him the power to bring in vaccine and mask mandates, unless it's on municipal property.

"This is only a defensive manoeuvre to make sure that the provincial rules are put in place," McIver told reporters, adding that he'd consider scrapping the legislation if Edmonton falls into line on masking.

"This is a case where one municipality is drifting, in my view, out of their lane and into the provincial lane," he added, declining to detail when he expected Bill 4 to pass.

The mask bylaw was cancelled by a vote of 8-5.

Instead, council decided 7-6 to draft a bylaw request for provincial approval for another mask bylaw under Bill 4. That bylaw could see masking required on transit, if the provincial rule for that is dropped at some point. It may also make masking mandatory in publicly accessible, city-owned facilities.

"We are treated like kids by the province. So, it's a really sad day," Mayor Amarjeet Sohi said during the council meeting. He wanted to keep the bylaw but said "that ability doesn't exist now."

"Mayor Sohi is entitled to his opinion," McIver said when asked about the "kids" comment. 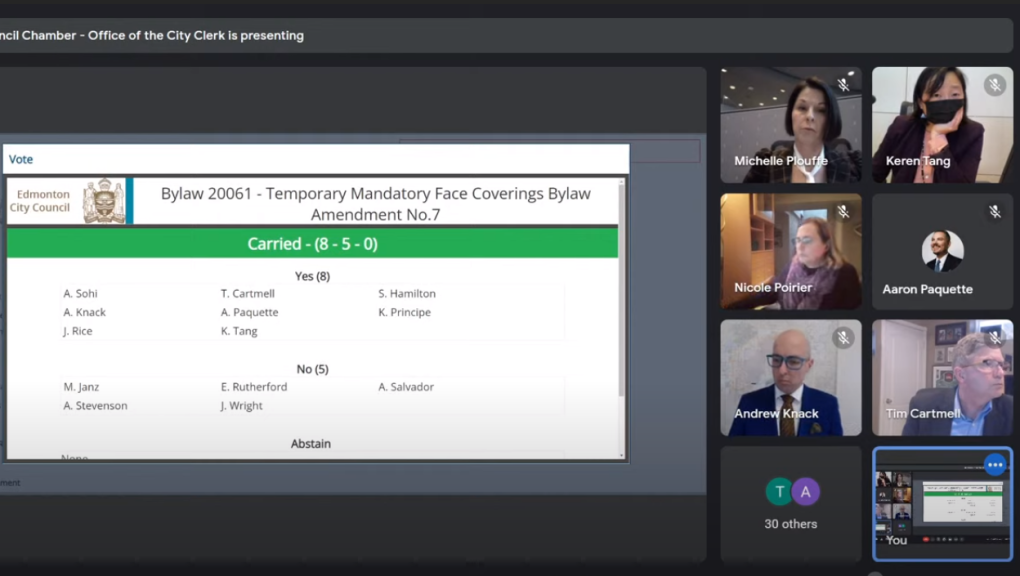 A vote in Edmonton City Council to remove the city's mask bylaw on March 8, 2022.

The premier broadly accused Edmonton's leaders of playing "political football" with masks, even after he said earlier in the pandemic that local governments should make those decisions.

"We should not allow politicians, at any level, to use COVID policy as a political tool to make political points," Kenney said Wednesday.

"As we now leave broad-based COVID restrictions behind, and move to an endemic phase, it's important we do so with unity and clarity as opposed to division and confusion."

"The provincial government encouraged and expected municipalities to implement mask bylaws when they lacked courage to implement on their own," Sohi said.

The mayor argues Alberta moved "too soon and too fast" to drop COVID-19 health measures and he was joined by another mayor in asking Kenney to uphold local decision making.

"You hear the premier asking the federal government to show respect to the provincial government and that's all that our level of government asks for in return," Cathy Heron said last week. She is the mayor of St. Albert and president of Alberta Municipalities.

"We are concerned that the Government of Alberta is setting a troubling precedent by amending the MGA – Alberta’s principal piece of legislation governing municipalities – without prior consultation," an updated statement from Heron on Tuesday said.

Edmonton tied its bylaw to two triggers, one being the removal of the provincial mask law.

The other was that active COVID-19 cases in the city should be below 100 per 100,000 people for 28 consecutive days before council considers ditching masks. That threshold was not reached, with 130 cases per 100,000 people in the latest numbers released on Monday, although testing protocols mean the real number is not actually known.

The city surveyed more than 66,000 people and found that only 30 per cent wanted the indoor mask bylaw to remain, with 68 per cent wanting it gone and two per cent unsure. That survey, however, was not limited to Edmonton residents and some councillors took issue with how it was conducted.

City administrators also wanted the masking bylaw dropped, and officials noted that city staff were allowing people into facilities even if they refused to wear a mask.

About 43 per cent of those surveyed said masking should still be mandatory on transit.

The province's chief medical officer of health declined to make clear her recommendation to the province on masks when asked on Tuesday.

"As you recall, a few weeks ago I made the statement that I still believe that masking is a prudent public health measure. And at the same time, the policy rules around masking are difficult ones that have to be made by weighing advantages and disadvantages," Dr. Deena Hinshaw said.

“These decisions should be made at the local level between democratically elected leaders and voters,” said NDP Municipal Affairs Critic Joe Ceci.

“For a government that claims it’s a grassroots party and a Premier who even signed a grassroots guarantee, the UCP is launching a direct attack on local democracy and the wishes of Albertans.”

Masks were still required on public transit for people 13 and older and in health-care and continuing-care facilities, under provincial rules.

Canada to upgrade Latvia battlegroup to a brigade, boost number of troops

Canada has signed an agreement to upgrade the 2,000-soldier battlegroup it leads in Latvia to a brigade, boosting the number of troops and pledging to lead it for at least the next five years.

DEVELOPING | Opioid manufacturer agrees to $150M settlement after class-action lawsuit led by B.C. asks for $60B

British Columbia says a proposed $150-million settlement with Purdue Pharma Canada has been reached for the recovery of health-care costs related to the sale and marketing of opioid-based pain medicines.

Police in Saanich, B.C., kept an area near a bank evacuated overnight as they continue to investigate a possible explosive device linked to a deadly gunfight with two suspected bank robbers.