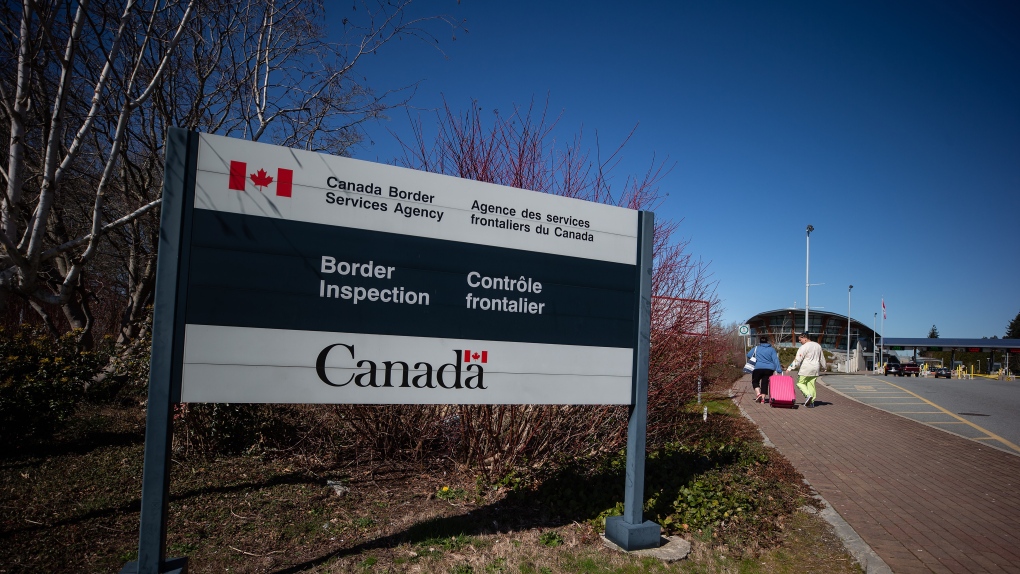 People approach the Douglas-Peace Arch border crossing to return to Canada on foot, in Surrey, B.C., on Monday, March 16, 2020. THE CANADIAN PRESS/Darryl Dyck

The Canada Border Services Agency says there are alternatives to holding immigration detainees in provincial jails after Alberta said it would no longer do so.

The province has given written notice to the federal government that it is ending an agreement to use provincial correctional centres to house people detained on immigration matters. Ottawa has until the end of June to come up with alternative arrangements.

A border agency spokeswoman said there are federal immigration holding centres, or IHCs, in Toronto, Laval, Que., and Surrey, B.C.

"To further reduce reliance on the provinces, the CBSA has introduced policies that will enable the transfer of individuals detained in a non-IHC region to an IHC when there is availability," Jacqueline Roby said in an email.

Mike Ellis, Alberta's minister of public safety and emergency services, said earlier this week that the change is in response to concerns about using correctional facilities to hold people who haven't been charged with a criminal offence or convicted of one.

"People who come to Canada for a fresh start and a new life deserve a better welcome than a jail cell while paperwork is sorted out. That is why we are also calling on all provinces to join us in ending this practice," he said.

However, Roby said the agency only detains those who are considered to be a danger to the public, unable to satisfy an officer of their identity or who are unlikely to appear for an immigration proceeding.

"The use of (provincial correctional facilities) for immigration detention is a measure of last resort for the very highest risk detainees, and allows both the provinces and the CBSA to manage the fair treatment of detainees," she said.

"The final decision as to whether or not a province will house an immigration detainee always rests with the provincial authority, regardless of whether or not an agreement is in place."

As of December, CBSA said there were 27 individuals at the immigration holding centre in Surrey, 73 in Toronto and 66 in Laval, while more than 11,300 cases across the country found alternatives to detention.

A Calgary immigration lawyer said Alberta's move away from holding immigration detainees is becoming a trend among provincial governments.

Jatin Shory said it doesn't make sense to put people who are traditionally not criminals in spaces such as remand centres or jails. With the large numbers of immigrants projected in the future, it's necessary for the federal government to invest in more holding centres.

"A common issue I have faced in these reviews is difficulty co-ordinating inmate hearings due to communication issues between the Immigration and Refugee Board of Canada's Immigration Division and remand centres."

This report by The Canadian Press was first published Jan. 20, 2023.