Vehicle convoys from across the province converged downtown near the legislature grounds as protesters gathered for a "Liberty March."

For the fourth weekend in a row, protests against COVID-19 public health measures and in support of "Freedom Convoy" demonstrations in Ottawa that have grown to include anti-government sentiments took place in downtown Edmonton, prompting police to issue traffic advisories.

Edmonton police estimated that about 680 vehicles and 1,200 people took to the streets Saturday afternoon to welcome incoming convoys and march downtown along Jasper Avenue. Many held Canadian flags and some signs read, "Free Canada!" and "Don't conform, don't comply."

The Edmonton Police Service expected traffic in the city to be affected by slow-moving vehicle convoys between at least 10:30 a.m. to 6 p.m. According to EPS, "significant" traffic disruptions are predicted on the Anthony Henday, Highway 16/Yellowhead Trail, Victoria Trail, Whitemud Drive, Gateway Boulevard, Queen Elizabeth Park Road, and throughout the downtown core. 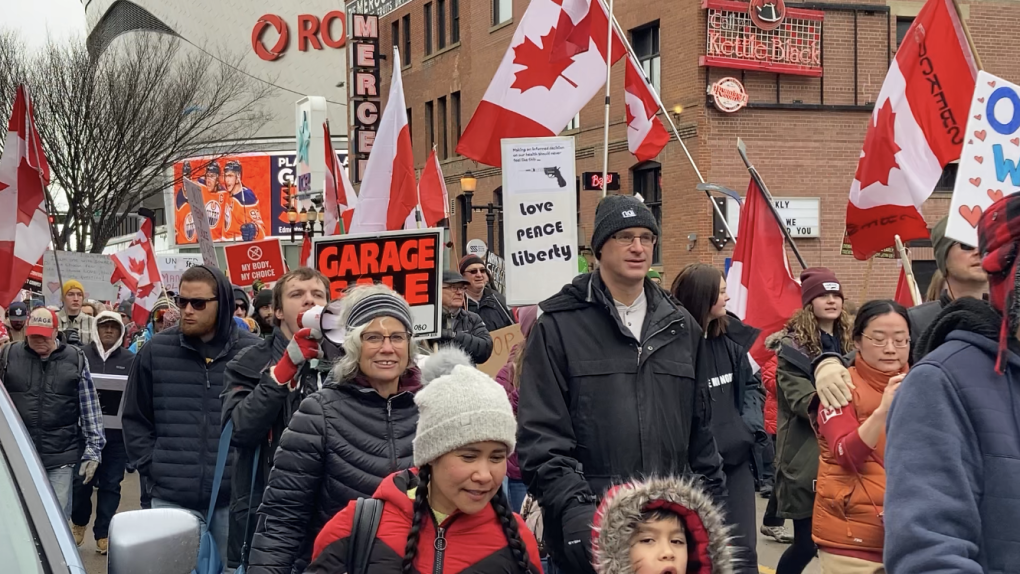 "We recognize that these demonstrations cause significant disruptions to traffic and create many concerns for residents and businesses," Voordenhout added. "However, citizens are reminded that 911 should only be used in emergency situations." 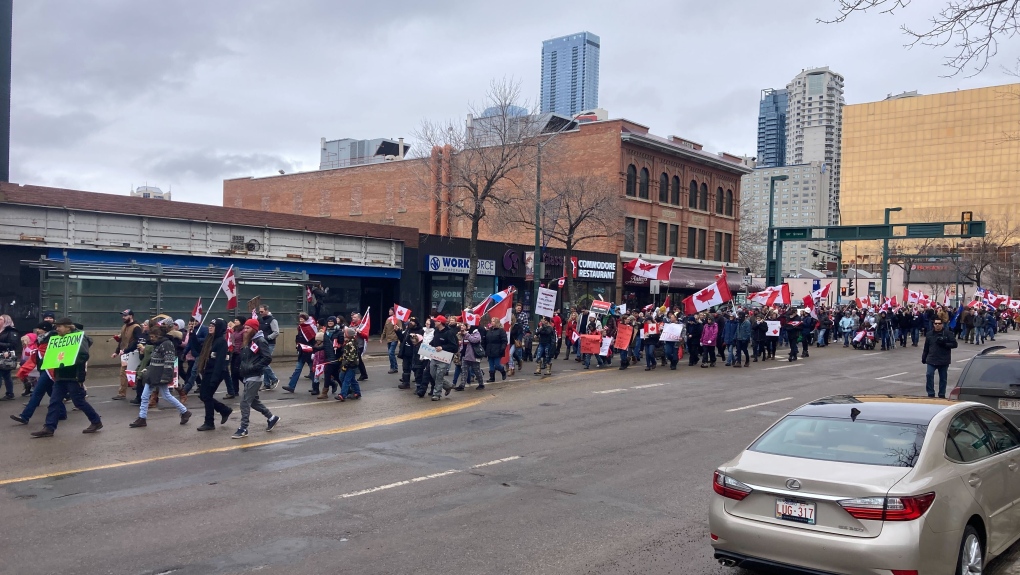 The city was granted a temporary noise injunction last week to give law enforcement more tools to respond to noise complaints. The interim injunction "prohibits" protesters "from the frequent or sustained sounding of motor vehicle horns" and similar devices. That measure expires on March 4.

Some of the other measures police may take to mitigate any disorder include verbal warnings, tickets, arrests, and gathering evidence for further investigations, Voordenhout said.

Early indication is that convoy noise levels are down this weekend. We are continuing to ticket for noise when it is safe to do so. Enforcement is taking place.

When asked by CTV News Edmonton about plans for the response by police to convoy demonstrators, Voordenhout said the service has significant resources ready to respond and investigate any incidents.

"Police presence and response goes well beyond those officers you may see," Voordenhout added.

Edmonton police issued 209 tickets to drivers involved in Saturday's protests, including 33 tickets that were mailed out. Of those 209 tickets, 71 were for noise violations and 27 were for distracted driving.

Officers also arrested one person on a warrant, Voordenhout added.

After some Edmontonians shared stories of being verbally harassed and challenged by demonstrators, an Edmonton councillor is organizing a safe walk program to increase safety during the protests.

Anne Stevenson, Ward O-day'min councillor, told CTV News Edmonton she has heard from many residents in the downtown core and Oliver areas who are tired of the disruption the protests cause.

"A lot of people aren't feeling safe right now, and they are feeling stuck and alone," she said.

"We need to remember that we are all a part of the same community and that we can be there for each other."

Volunteers can register for hour-long shifts to pair up and meet walkers who would prefer the company.

"It's just about making sure people don't feel alone," Stevenson said. "Safe walk is a way you can take action and make your community feel like a safer place.

"These folks aren't there to be bodyguards or to do anything other than to be with their neighbour and help them get to where they need to go."

For more information or to volunteer, visit the Heart of YEG Safe Walk program website.