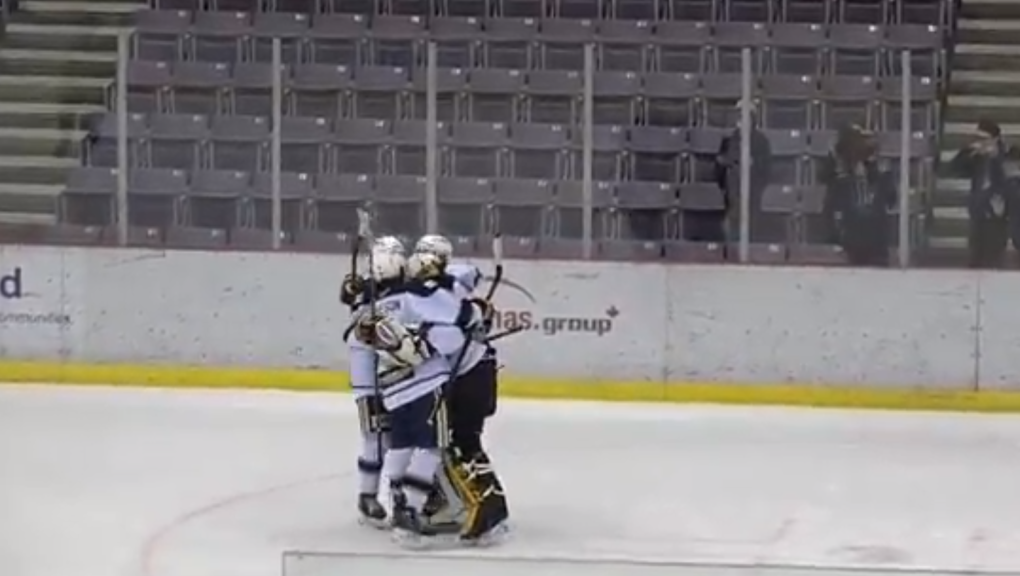 With the Saints leading 5-3, their opponent, the Grande Prairie Storm, pulled their goaltender for an extra attacker.

With 50 seconds left in the third period, the puck was sent behind the Saints' net where Martin stopped it, then turned and lofted it down the ice into the empty net.

Martin's Spruce Grove teammates rushed over to congratulate him on the rare feat and what was his first goal.

VIDEO: Tristan Martin scores what is believed to be the first goalie goal in AJHL history!!#AJHL | #SaintsNation pic.twitter.com/DdbYSBUFxz

“It was my first-ever crack at it in a game … so it was pretty cool,” Martin told CTV News on Wednesday.

Martin said he didn’t hesitate to try to score when he grabbed the puck behind the net.

“I was going for it. Then I got scared when the d-man jumped high at the blueline there and it just missed his glove but then it started curving back in towards the net. Then I was like, 'Oh no, it’s going in.'”

The AJHL told CTV News it believes it's the first time a goalie has shot the puck down the length of the ice to score a goal in the league's 58-year history.

However, AJHL Vice President Charla Flett added that Martin is not the first goalie to be credited with a goal.

Sherwood Park Crusaders goalie Jake Morrissey in February 2017 when he was the last player on his team to touch the puck when he made a save, before a Camrose Kodiaks defender accidentally passed it into his own empty net.

Fort McMurray Oil Barons netminder Jimmy Bernier was credited with two goals during the 2005/06 season, but the team chalks that up to a clerical error.

And, Olds Grizzlys goalie Glen Furgason was also credited with a goal way back in 1985/86.

Martin, 19, hales from St. Vincent, Alta. He has only been with the Spruce Grove Saints since a Dec. 2 trade with the Grizzlys.

After the 6-3 victory, the Saints sit in first place in the AJHL North Division with a 34-7-4 record. They continue a road trip in Whitecourt Wednesday night against the Wolverines.

The Russian military said Thursday that more Ukrainian fighters who were making a last stand in Mariupol have surrendered, bringing the total who have left their stronghold to 1,730, while the Red Cross said it had registered hundreds of them as prisoners of war.