An E. coli outbreak in Edmonton has been linked to certain raw and ready-to-eat pork products from a butcher shop south of Wetaskiwin.

Alberta Health Services announced Wednesday it has "a fair degree of confidence" it has identified the source of the E. coli outbreak, saying the food-borne illness is associated with pork products from The Meat Shop at Pine Haven.

"All the cases that we’ve identified to this point have a linkage to some degree back to the meat shop,” Dr. Jasmine Hasselback wtih AHS said.

"As time moved forward and more individuals did present with illness, we could gather information and that bolstered what we had to be able to do an investigation.”

There are 36 lab-confirmed E. coli cases, including 11 patients who needed hospital care and one person who likely died as a result of an E. coli infection, AHS said.

CFIA said it is possible more than 15 different pork products have been contaminated. The recall is for meat sold and distributed between February 19 and April 24.

The list of recalled items can be found here.

On The Meat Shop at Pine Haven’s web site, a notice was posted Monday saying its production line has been temporarily closed for maintenance “due to some unforeseen circumstances.”

It also advises wholesale customers to contact the sales department for beef or chicken orders.

The store is closed until further notice. 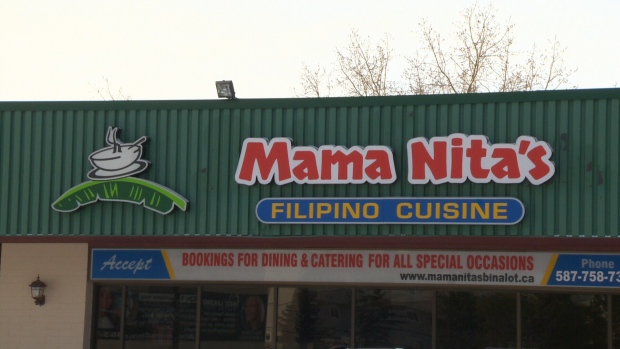 The health authority found 21 of the lab-confirmed cases are linked to Mama Nita’s Binalot, a Mill Woods restaurant, while the other 15 patients have no known connection to the business.

AHS initially could not find the source of the E. coli contamination at the restaurant, but has now learned that The Meat Shop is one of Mama Nita's food suppliers.

"When we were looking at the foods people ate at the restaurant, there actually wasn’t a consistent pattern at that time. It wasn’t until we were able to start adding information regarding the individuals not linked to the restaurant that pork became clearer," Dr. Hasselback said.

AHS said the person who died did not dine at Mama Nita's.

It said they no longer have health concerns surrounding that business.

The main symptom of E. coli is diarrhea, which could be bloody. In more severe cases, hemolytic uremic syndrome, a type of kidney failure, can develop.

AHS recommends these proper hygiene, and safe food handling and preparation practices, to reduce risk of E. coli and other food-borne infections:

AHS said anyone experiencing symptoms consistent with E. coli is asked to call Health Link at 811. Anyone concerned, or who believes they could be developing symptoms is asked to visit a healthcare clinic or family doctor, and mention the possible exposure.