As Father's Day creeps closer, all Jolie Hoang can think of is the night her dad died in Edmonton's Chinatown four weeks ago.

At 11 p.m. on May 18, Ban Hoang still had not returned home. His family's calls went unanswered, so a relative went to Chinatown where Hoang had run an audio-visual electronics store for more than three decades. They found several blocks of the district, northeast of Edmonton's downtown core, taped off by police.

When Jolie and her mom arrived, they were told a dead man had been found inside the family's business. They waited hours in their vehicle at the scene until investigators confirmed their fear.

"I lost it. I fell to my knees and cried and cried. And I screamed. Even though I knew it was already my dad," Jolie told CTV News Edmonton in an interview Tuesday evening. "Knowing he was all alone for so many hours. I didn't even call him to check up on him. He was just laying there alone. Alone and cold."

Ban's daughter is the first to be speaking publicly about the longtime Chinatown entrepreneur who told people to call him "Uncle Ben" because he "wanted everyone to feel like they were part of his family."

Welcoming, but private, was the 61-year-old who came to Canada as a teenager from a refugee camp in China.

According to Jolie, he taught himself English, bearing his first northern Alberta winters by wrapping himself in newspaper during the commute to work. Over the years, he would sponsor the rest of his family's immigration to Canada and open his first store in Edmonton's Pacific Rim Mall, then eventually Universal Electronics and Videos Inc. in Chinatown, supplying karaoke and audio equipment stores across Canada. 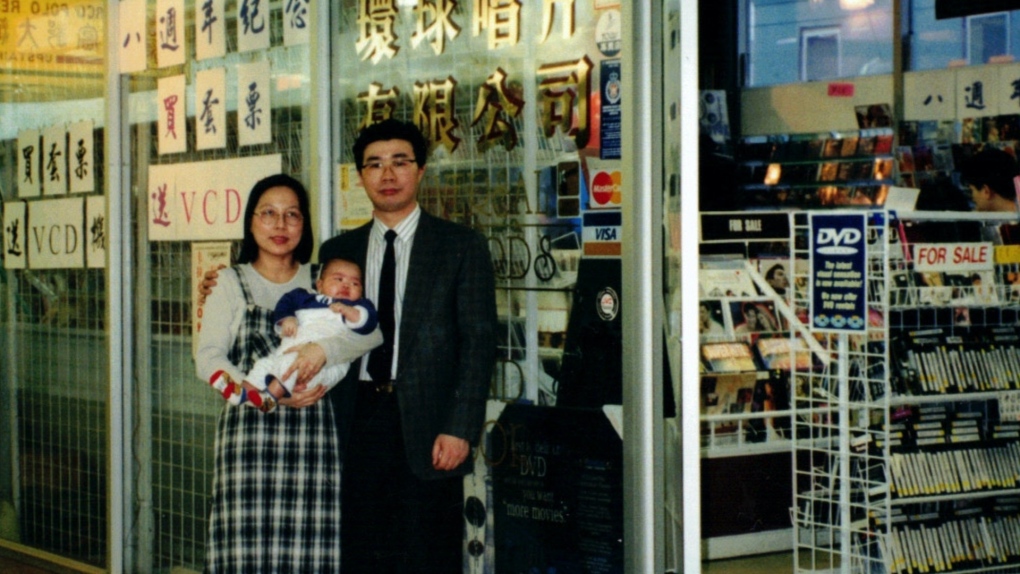 In this undated photo, Ban Hoang, right, stands with his wife and daughter in front of his first store in Pacific Rim Mall in Edmonton. (Courtesy: Jolie Hoang)

He didn't like his daughter posting his picture on social media, and he wouldn't have wanted his daughter talking to news media, Jolie is sure.

"I'm sorry, Dad, but it needs to be done," the 25-year-old said on Tuesday, shrugging. "There's so many years of neglect in Chinatown. This needs to stop."

On May 18, Ban Hoang was one of two victims in a pair of fatal attacks in Chinatown. Hung Trang, 64, was beaten to death in an auto-body shop not far from Hoang's store.

RCMP dropped Bone off in Edmonton three days before the killings. He had been released from the Edmonton Remand Centre on April 29 under court-ordered conditions not to travel to Edmonton unless accompanied by an Alberta Beach resident, whose house he was staying at, according to the provincial justice department. When the Alberta Beach man became concerned for his safety, RCMP took Bone to Edmonton and notified city police. When Edmonton Police Service later learned Bone was not supposed to come to Edmonton on his own, officers talked to him but said they could not detain him because no crime had been committed.

These facts were only confirmed by authorities three weeks after the homicides, when police and government officials were asked about police's recent interactions with Bone.

Jolie called both law enforcement's handling of Bone and its withholding of those details unacceptable.

"No answers. Nothing. No calls from them," Jolie said.

"After the news on Friday, I just shut down." 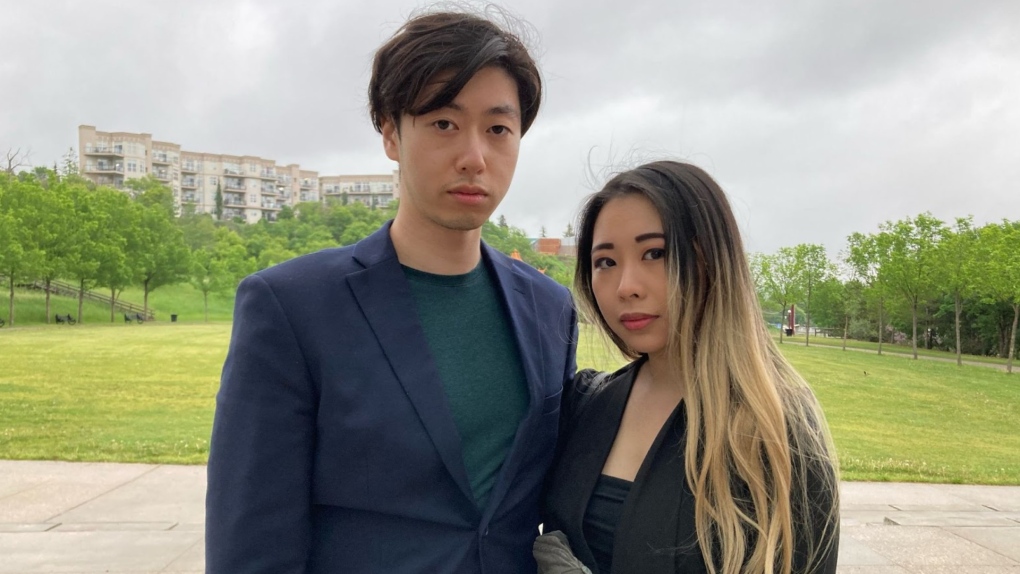 Jolie Hoang, right, is pictured with her partner Garry Liao on June 14, 2022, nearly four weeks after her father was killed in an attack in Chinatown.

CTV News Edmonton attempted to clarify the terms of Bone's release with the justice ministry on Wednesday. Previously, Edmonton's mayor said Bone was staying in Alberta Beach until a bed became available at an Edmonton treatment facility. However, a spokesperson for Justice Minister and Solicitor General Tyler Shandro told CTV News Edmonton "an alternative addiction treatment facility without a wait-list was made available."

On Wednesday, Shandro's press secretary declined to say whether that meant there was a room free when Bone was released, when access to the alternative facility was provided, and whether Bone actually checked in.

"I understand that there's an investigation going on but, like, I lost all of it. All my trust," Jolie said.

'I STILL HAD THINGS I WANTED TO DO FOR HIM'

She also, like many Chinatown residents and workers, is watching the city pull together a plan to make the area safer.

So far, EPS deployed more resources in central Edmonton, city council has tightened bylaws around loitering and drug use on public transit, and the city has asked for more provincial funding for police and shelter spaces.

On Wednesday, council committed to completing the infrastructure work laid out in its "Chinatown Strategy" and heard from business owners and community members about what improvements they would like to see. Suggestions ranged from providing free two-hour parking – since the consensus is that customers like to drive for safety reasons – to delaying 97 Street construction for one year so as to not disrupt the business that is finally from the pandemic and revitalizing historically significant locations like Mary Burlie Park.

Jolie wants to contribute to the effort. She and her mom are fundraising to put on an annual talent show and karaoke competition during August's Chinatown Night Market, since her dad "brought karaoke to Edmonton." 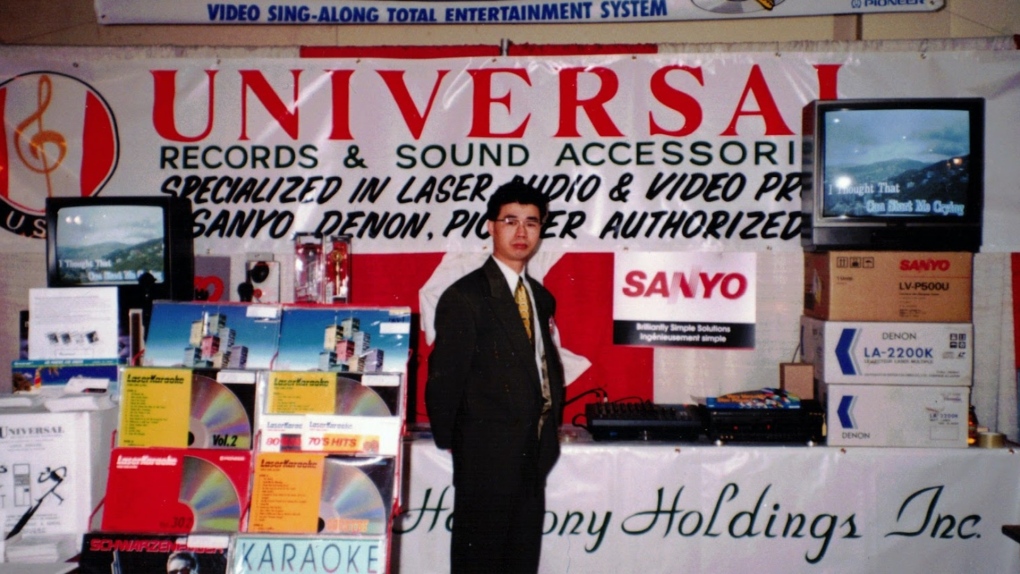 In this undated photo, Ban Hoang poses for a picture during a showcase. He had run his audio-visual electronics store, Universal Electronics and Videos Inc., in Edmonton's Chinatown for more than 30 years when he was killed in May 2022. (Courtesy: Jolie Hoang)"Businesses are struggling right now. Maybe we can bring people into Chinatown," she said.

They also see the event as a way to celebrate Ban's life.

In his business where his body was found, an aunt found washed rice and fish. Jolie believes her dad was in the middle of making a meal for her and her mom when he was attacked, like he did most nights.

"I heard him tell one of my aunties that he's happy with his life right now. He listened to the best music. He ate the best type of food. And he's drinking the best type of tea. And he's with the people he adores. It sounds like he had a fulfilling life," Jolie said.

"Even though he might feel like it's fulfilling, I still had things I wanted to do for him."

As MPs kicked off a study on the future of the House of Commons' use of a hybrid sitting structure, Speaker Anthony Rota is calling for members of Parliament to consider the 'big picture' in making their recommendations as to whether it's time to retire the virtual elements of proceedings that were ushered in response to the COVID-19 pandemic.

Jaqueline McDermott, 22, from Kitchener has been reported missing in B.C., and her family is putting out a plea across the country for help.

A Canadian naval officer has been relieved of her duties aboard a coastal defence vessel deployed on a NATO operation in Europe over allegations of inappropriate sexual conduct.

A child welfare worker told a coroner's inquest Tuesday that had she known an Indigenous teen in her care had a history of suicidal thoughts and self-harm, she would have tried to talk to him about it.