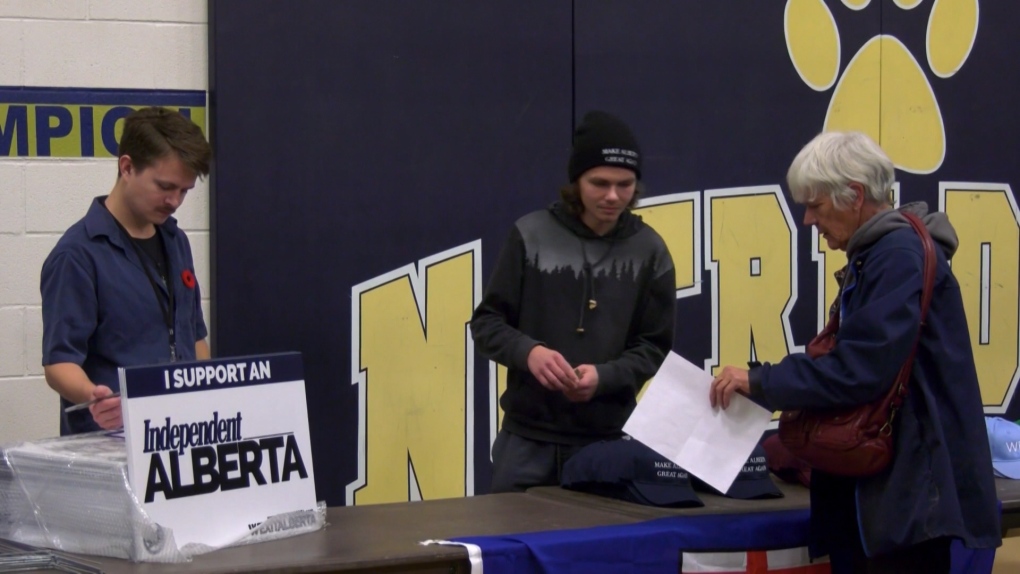 Hundreds attended a Wexit meeting in northeast Calgary on Nov. 16.

EDMONTON -- A group demanding the separation of the western provinces from the rest of Canada says it's only a matter of time before their goal becomes reality, as an application to be recognized as federal political party is submitted to Elections Canada.

Separatism advocates gathered in Calgary Saturday night to discuss the goals of Wexit Alberta and its national counterpart, Wexit Canada.

"It's not a left wing versus a right wing thing. The reality is that confederation does not work for western Canada," said the group's co-founder, Peter Downing.

"If the rest of Canada wants to have a constitutional convention to fix the problems, now is probably the time to do it."

The separatist movement has grown since Justin Trudeau's Liberal Party was reelected as government without securing a single seat in Alberta.

Supporters have claimed unfair treatment by Ottawa in the form of the carbon tax, Bills C-69 and C-48, and the equalization formula—or, as Downing put it, "a tyranny of the majority."

"This isn’t just about getting one pipeline—this is about people’s lives and futures. And it’s being taken away capriciously by policy coming out of eastern Canada," he commented.

"I think every time Ottawa does something that is seen as not being in the interest of Alberta, or the west, we'll see a rise of this sentiment again," Williams told CTV News Calgary.

While she said a separatist party could undermine a western desire to have a united voice in the federal government, Williams noted the concerns of Wexit have perhaps been heard more clearly than before.

Downing said the group is undeterred by both Alberta Premier Jason Kenney's recent touting of a "fairer deal" from Canada rather than western separation, and public criticism of Wexit as griping.

"At the end of the day, you want to keep saying that? That's fine. Watch these rallies grow," Downing said.

"Watch us put more pressure on the premier of Alberta to implement not just the Firewall protocol, which he's had to start to implement now, but watch the referendum on separation and we'll see who's laughing."

A rally in Red Deer is being planned by Wexit organizers in two weeks.

It’s expected to be the last rally before the party ventures to gain support outside of Alberta in 2020.