Woman dies from injuries after being hit by SUV on Jasper Avenue: EPS 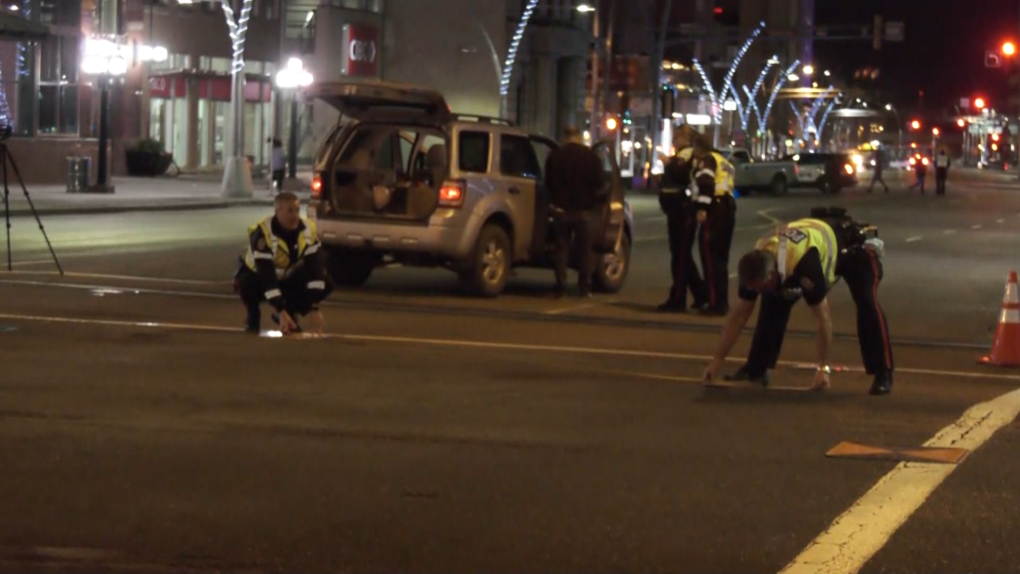 A woman was killed being hit by an SUV on Jasper Avenue. Tuesday Nov. 30, 2021 (CTV News Edmonton)
EDMONTON -

A pedestrian was fatally hit by an SUV on Jasper Avenue on Tuesday.

The crash near Jasper Avenue and 102 Street was reported around 4:50 p.m.

A 77-year-old woman was walking south on the east side of 102 Street and crossing Jasper Avenue when she was hit by a Ford Escape, according to Edmonton Police Service. She was crossing at a marked crosswalk.

The 38-year-old man driving the SUV was also driving south and was turning east on to Jasper Avenue when the woman was hit, EPS said.

The woman was taken to hospital with life-threatening injuries where she died.

Speed and alcohol are not considered to be factors in the crash, according to the Major Collisions Unit.

“No charges have been laid, at this time, as the investigation is still ongoing,” said EPS in a news release.

The Canada Revenue Agency is sending out a new round of letters to pandemic aid recipients to verify they were eligible for the help, and warning of potential need for repayments.

Canada's top doctor says even though the average daily COVID-19 case count across the country is down 30 per cent compared to last week, it's not an accurate reflection of the state of the pandemic.

Ukrainian police on Thursday detained a National Guard soldier who shot security guards at a military factory for unknown reasons, killing five people and injuring five others, the interior minister said in a Facebook post.

U.S. man removed from heart transplant list for being unvaccinated against COVID-19

After being at the front of the line to receive a heart transplant, 31-year-old DJ Ferguson was denied surgery for being unvaccinated against COVID-19.

Poland has started building a US$394 million wall on its eastern border intended to block migrants pushed by Belarus, in what the European Union calls a 'hybrid attack,' from crossing illegally into EU territory.

Airline pilot Kyle Hippchen could have -- should have -- been on board when SpaceX launched its first tourists into orbit last year after winning a sweepstakes, but ended up giving the honour to a friend.