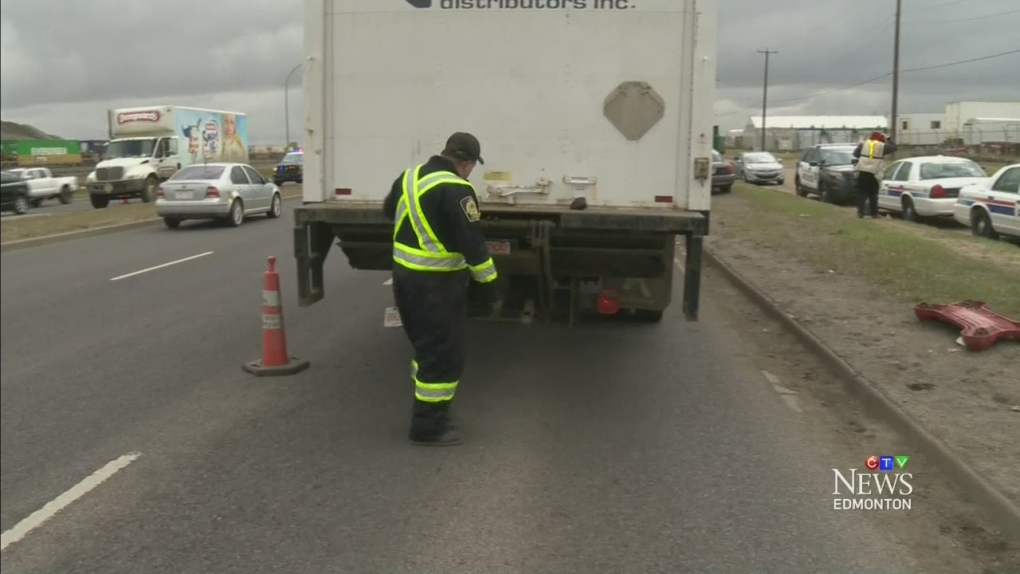 Almost 500 trucks, semi-trailers and other commercial vehicles were targeted for inspection during an enforcement blitz this month and just over half were pulled from service pending problems being fixed.

Only one in four vehicles over 4,500 kilograms in size that were pulled over across the province actually passed.

Steve Callahan, chief transport officer for Alberta, said highways are safe overall, but the numbers are a concern.

He said the province wants to do more commercial vehicle checks and hire up to 20 more transport inspectors.

"We are on it," Callahan said. "We understand that we have safety issues out there and that we are going to try and correct that."

Pipelines and railways tend to get the headlines in Alberta, but commercial trucks are a driving force when it comes to servicing the province's booming economy. The government estimates there are about 22,000 trucking firms that ship about 60 per cent of the province's freight.

Under provincial law, drivers are responsible for ensuring that their commercial rigs are safe for the road.

Sgt. Kerry Bates of the Edmonton Police Service commercial vehicle unit said most trucks are properly maintained, but the percentage being pulled out of service for problems is on the rise.

During a sweep in the city earlier this month, 52 per cent of  commercial vehicles intercepted for safety inspections failed. That's up from 42 per cent last spring.

Bates said drivers must take the time before getting behind the wheel to ensure that their trucks work properly. That includes regular maintenance checks and properly securing loads.

"It is obviously not getting better," Bates said. "The drivers need to be more vigilant with their checks that they are supposed to be doing daily."

Highways that connect Edmonton to the oilsands region are of particular concern due to the high volume of commercial vehicle traffic. Police say there has been an increase in collisions involving trucks.

Clark said drivers are under pressure to deliver their loads to industrial sites and work camps. Some are behind the wheel for up to 20 hours a day -- well beyond the 12 hours allowed by law.

The need for safety is not always foremost in their minds, he said.

"About 50 per cent of the drivers I talk to are receptive to what I tell them and they are willing to make repairs," Clark said from Lac La Biche. "The other 50 per cent are upset and argumentative and say that we are picking on them."

Police held 12 check stops in the region last year. This year they plan to hold 28.

Richard Warnock, CEO of the Alberta Motor Transport Association, said safety is paramount for its member companies, which mainly use big tractor-trailer units.

He suggested problems mostly involve other kinds of trucks, especially smaller vehicles that are used off main and secondary highways.