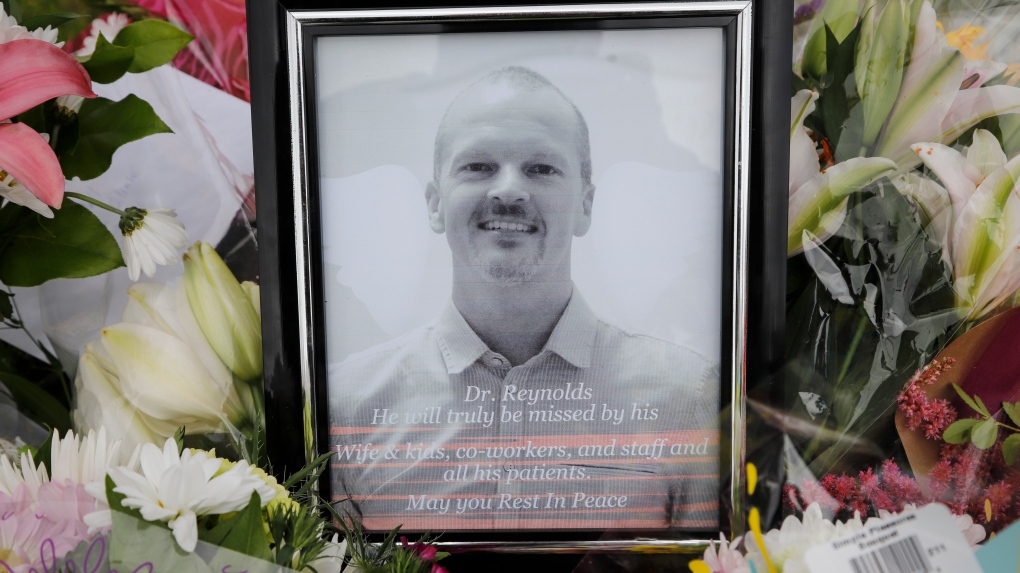 An impromptu memorial for Dr. Walter Reynolds, who died after he was attacked in an examination room rests outside the Village Mall walk-in clinic in Red Deer, Alta., Tuesday, Aug. 11, 2020.THE CANADIAN PRESS/Jeff McIntosh

RED DEER -- An Alberta man facing a trial in the slaying of a family doctor at a medical clinic is facing another review of his mental health.

Deng Mabiour, 54, was initially deemed fit to stand trial on a charge of first-degree murder in the death of Dr. Walter Reynolds, who was killed at the Village Mall Walk-In Clinic in Red Deer, Alta., last summer.

But court was told Monday that the Alberta Review Board is to further assess Mabiour.

“If I understand correctly, there is a review board hearing on Wednesday,” said Crown prosecutor Bina Border.

Border said she received a letter from psychiatrist Dr. Yuri Metelitso last week that indicated Mabiour had attended an appointment at the Tom Baker Cancer Centre in Calgary for “a serious medical condition.”

Mabiour, appearing by video from the Southern Alberta Forensic Psychiatry Centre, said little during his appearance except to confirm he still intends to defend himself at his four-week trial, which is scheduled for Nov. 22 to Dec. 17.

Court of Queen's Bench Justice Paul Belzil expressed concern about whether Mabiour would be able to proceed to trial.

“He was assessed at the provincial court level as fit to stand trial. That may no longer be the situation,” Belzil said.

He asked the Crown to write to the doctor to find out how bad Mabiour's condition is.

“I would like, without impacting Mr. Mabiour's privacy interests, to find out how serious his physical issue is,” said Belzil.

“I think we need to sort that out.”

Red Deer lawyer Jason Snider was appointed an amicus curiae, or friend of the court, to assist Mabiour during his trial.

“Previously there was a presumption of fitness and, I wasn't amicus at the time, but he was not co-operative with any type of assessment,” Snider explained outside court.

“There's an indication now from the (forensic psychiatry centre) that he's currently in their centre on a mental-health warrant. He's been certified under the Mental Health Act and that's what the justice is inquiring on.”

Mabiour is to be back in court, after his assessment, on April 14.

Reynolds, a 45-year-old father of two, was attacked with a weapon while working at the clinic on Aug. 10. He died in hospital.

One witness told media that she was in the waiting room when she heard cries for help and saw a man with a hammer and a machete.

This report by The Canadian Press was first published March 22, 2021.