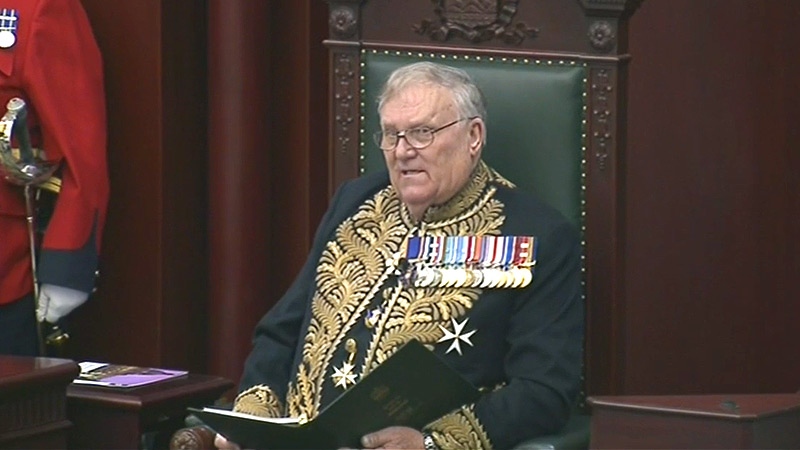 Lieutenant Governor Donald Ethell delivers the Speech from the Throne at the Alberta Legislature on Monday, March 3, 2014.

EDMONTON -- Premier Alison Redford is promising to deliver on a promise to strike a new deal with Alberta's two big cities.

"Your government recognizes the unique challenges faced by our two largest cities and will finalize the Calgary and Edmonton city charters," Lt.-Gov. Don Ethell read from the speech to the throne Monday.

The intent is to find a better way for the two cities to manage issues unique to each metropolis rather than falling under the one-size-fits-all parameters of the Municipal Government Act.

The project, first outlined in June 2012, was delayed last year when the province had to deal with widespread flooding in Calgary and other parts of southern Alberta.

The throne speech said there will be help for other municipalities as well. The government plans to renew a multibillion-dollar long-term municipal sustainability initiative. The program delivers lump sums to municipalities to spend on roads, community buildings and sports facilities.

And funding for a program that grants money for public transit projects is also to be renewed. The current budget allocation for GreenTrip is $200 million.

Ethell said the province will also finish overhauling the Municipal Government Act and figure out ways to solve overlapping growth in a rapidly developing province.

"We know that Alberta's success depends on all regions of the province -- no matter how small -- being able to meet that growth head on."

The throne speech outlines the priorities and plans for Redford's government as it reaches the mid-term of a four-year mandate.

Finance Minister Doug Horner is to deliver the 2014-15 budget on Thursday. Indications are that while the province still intends to borrow $17 billion for infrastructure, the books for day-to-day operational spending will be balanced or in surplus.

The flagship bill of the sitting looks to be the creation of two new endowment funds to fund agricultural research and to find ways to alleviate poverty and family violence.

Redford's Progressive Conservatives have been lobbying for new pipelines to take oil to refineries on British Columbia's west coast and to the Gulf Coast in Texas.

To that end, the province says it will partner with industry to create a pipeline training school to teach the skills of working heavy machinery, laying pipe and reclaiming land.

The government is also promising changes to make public more information on children who die in government care.

And Ethell said Redford plans to pursue efforts with other provinces to make it easier for goods and services to move across the country in a Canada-wide free-trade zone.

The spring sitting comes as the premier faces public discontent and free-falling poll numbers over lavish spending for herself and members of her inner circle, including a $45,000 trip for Redford and her aide to go to Nelson Mandela's funeral in December.

Redford has apologized for the high cost of the Mandela trip, but has refused to pay any of it back.

On Monday, Postmedia published a Leger poll suggesting two out of every three Albertans disapprove of Redford's leadership and with the Conservatives now trailing the Opposition Wildrose party in overall support.