EDMONTON -- Dozens of families living at a Habitat For Humanity-built housing complex in Edmonton got some support Monday in their fight for a new mortgage deal.

Black Lives Matter Edmonton organized a rally in the parking lot of a Habitat for Humanity ReStore on Monday.

The group said it was standing in solidarity with 57 low-income families — many of them Black, Muslim, disabled or low-income — living at Cater Place who are "at risk of being put out on the street" by Habitat for Humanity Edmonton.

“BLM YEG is anti-exploitation, and so that’s exactly what this is,” BLM Edmonton member Jostina Johannes said Monday.

CTV News Edmonton has previously reported on the families’ plight: They say Habitat has reneged on the mortgage agreement that attracted them to the housing program.

When they applied for the Carter Place build, they say they were sold zero-interest mortgages with monthly payments based on income.

Now, those mortgages are split into two: The first is interest-free and the second, through Service Credit Union, has below-market interest.

In mid-June, Habitat Edmonton Board Chair Chris Bruce said families’ monthly payments won’t change, the loan will help them build credit, and families will share in the profits if their home gains value by the time they want to sell it.

Habitat Edmonton says the change will allow it to pay down its debt. The charity is $27-million in the red.

Habitat Edmonton's 2019 annual report showed the non-profit faced a major cutback on government grants last year, going from more than $3.5-million in 2018 to just over $754,000 a year later.

57 of the Carter Place families have launched a lawsuit against Habitat for Humanity Edmonton. 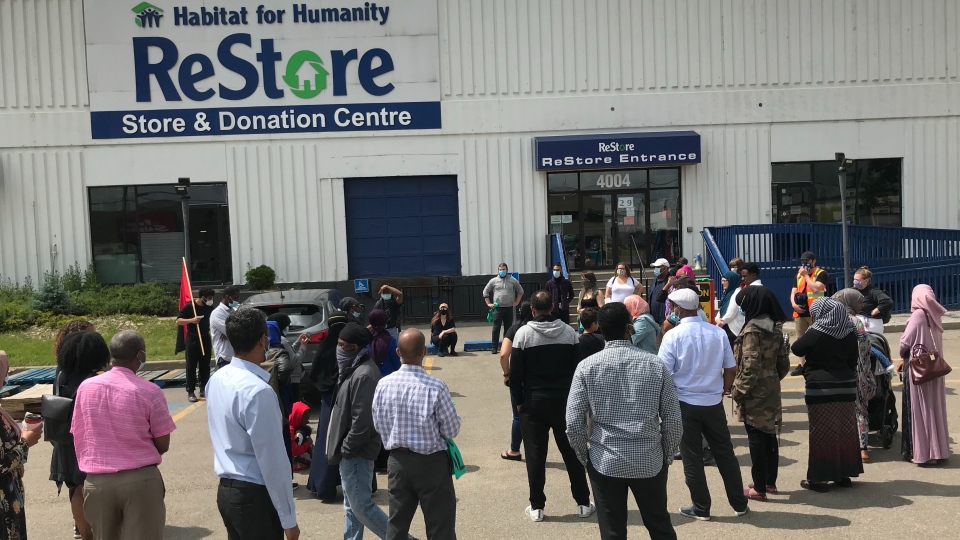 Avnish Nanda, the lawyer representing the families says the loan isn’t working. “I have 57 families that I’m representing, I have yet to meet one family who says they’ve been approved.”

That’s what Carter Place resident Naimo Musse says happened to her. "I did not want to be homeless in the middle of a pandemic. I applied for the bank and I was denied because I don't make enough money." Musse is a single mother of three. Her youngest son has severe autism, and is often cared for by neighbours, according to Nanda.

Musse was one of about 100 people who showed up in the ReStore parking lot Monday with banners and signs to protest the changes. Employees locked the front doors after some of those protesting entered the store.

For more than a month, Habitat Edmonton has been offering a settlement to any family that agrees to drop out of the lawsuit. The settlement is worth 75% of the equity families paid into their homes during the year long “tenancy period” all Habitat families go through prior to signing a mortgage. However, according to Nanda, that amount is only available to those who sign the document before June 30, 2020. The lawyer says anyone who signs in July would only be paid 50% of their equity, while those who don't sign at all are being told to move out by July 31.

"This is Habitat saying, 'Oh, you want to stay a couple of weeks in the midst of a global pandemic and not be out on the street? Sign this release," said Nanda.

Even Habitat for Humanity's global organization has weighed in on the dispute. International senior vice-president Adrienne Goolsby recently called out the Edmonton chapter, telling it to reach an appropriate solution.

"We've assured these families that we will not be taking any steps to have them leave homes if they're renting homes at the moment, until this is resolved," said president and CEO Julia Deans.

However, Nanda told CTV News Edmonton Monday, he had not received any correspondence from Habitat Edmonton or Habitat Canada saying as much.

In a response to questions from the media, Habitat Edmonton Chair Chris Bruce said no family has signed a release without taking time to first review and consider it.

The families and Habitat Edmonton each say they want a mediator to help resolve the dispute outside of court.

But Nanda does not believe the mediation will include all 57 of his families. He shared an email from Habitat Edmonton’s lawyer Todd Shipley dated June 26 with CTV News Edmonton that says in part “...they [Habitat Edmonton] are open to entering into mediation with those who have not determined how they wish to proceed.”

Nanda believes only those who have not already signed Habitat’s release will be allowed to participate.

“I have families now who have signed, or are asking me whether they should sign who feel pressured, or feel regret that they did sign because they didn’t know what they were signing.” Nanda said.

Chris Bruce says "Our priority is to get a fair and quick resolution for these families and keeping partner families in Habitat homes will be the best outcome for us."