Edmonton animal control officers are trying to locate the owner of a cat found with an elastic band embedded in its neck last week.

The cat, a seven-month-old female domestic shorthair, was found in a field near 129 Avenue and 118 Street “in physical distress,” animal control said.

She was wearing a leopard-print collar with a bell but did not have a tag or microchip.

Officers are asking the owner of the cat or anyone who knows what happened to it to contact them by calling 311.

"The band was actually so tight on this kitten that it had embedded into the neck of the cat, meaning that its skin had started growing around the elastic band," said Brianne Grey, a peace officer with Animal Care and Control. She added the band was likely around the cat's neck for one week.

The cat will be available for adoption in about 10 days, depending on how its wounds are healing as well as available space with partner organizations.

"She's been doing extremely well. She's in great condition and that wound is really starting to heal well on its own," said 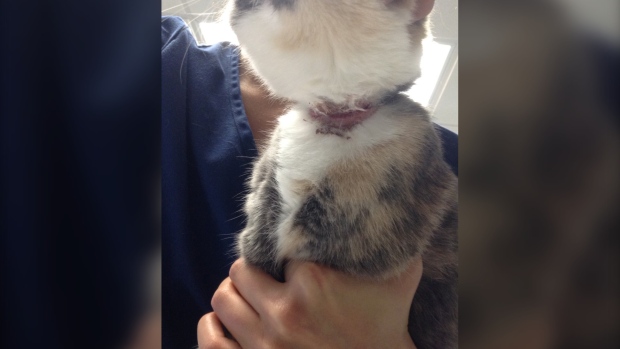 A wound caused by an elastic band embedded in the cat's neck is shown. (Submitted)