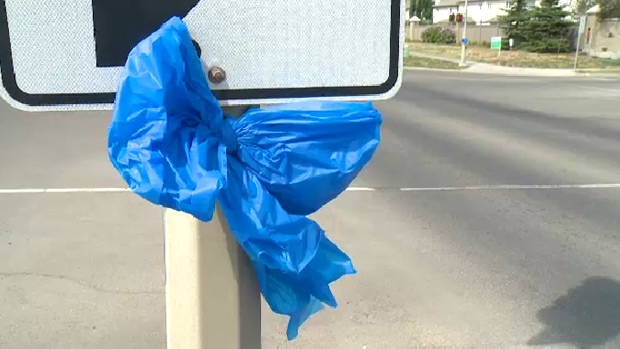 Blue ribbons were tied around posts, signs, trees and bridges around Edmonton in tribute to slain EPS officer Const. Daniel Woodall on June 8.

Weeks after they were tied throughout the city in tribute to an Edmonton Police Service officer killed in the line of duty, officials with the City of Edmonton are asking residents for help removing the blue ribbons.

On Monday, June 8, Const. Daniel Woodall was shot and killed as he and other officers with the Hate Crimes Unit executed an arrest warrant on harassment charges in the area of 184 Street and Callingwood Road.

In the wake of his death, Edmontonians tied blue ribbons to posts, bridges, and trees on streets throughout the City as a tribute to the fallen officer.

Now, City and EPS officials are asking Edmontonians to help take the ribbons down.

“So for people who put those ribbons up, we’re supported in this by the Edmonton Police Service,” Trish Webb with the City of Edmonton said. “Anyone who put up a ribbon, [it’s] time to come down, feel free to take it down and dispose of it properly.”

City officials said discussions are underway with police about establishing a permanent memorial to Woodall.