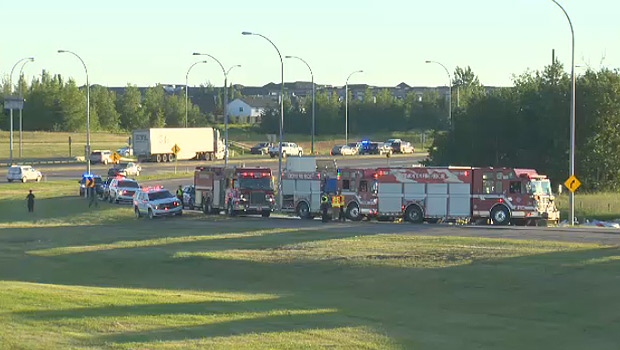 EPS, and emergency crews on the scene of a fatal crash on the southbound ramp from Anthony Henday Dr. to Whitemud Dr. on Monday, July 3, 2017.

The family of a couple who died after their vehicle was struck head-on in west Edmonton Monday evening identified the pair, and released a statement Thursday afternoon.

The couple has been identified as Ken Ahronson, 64, and Stella Constantin, 62.

“We would like to thank our family, friends and the Edmonton community for their love, support and kind words during this tragic time for our families.”

The statement said the couple “will always be remembered for their big hearts and big smiles. A willingness to help anyone, at any time, and always being down for a good laugh were their most endearing qualities” saying that was “rivalled only by [their] love for each other. Ken constantly referred to Stella as ‘his person’.”

On Monday night, a stolen truck, that had been pursued by police for a short time collided with the vehicle they were in head-on on the ramp from Anthony Henday Drive southbound to Whitemud Drive westbound.

Ahronson was pronounced dead at the scene, and Constantin was rushed to hospital with life-threatening injuries. She succumbed to her injuries Tuesday night.

Three people have been charged in connection to the incident, and police are looking for a fourth suspect.

Because of police involvement in pursuing the stolen vehicle before the crash, the Alberta Serious Incident Response Team (ASIRT) is investigating.