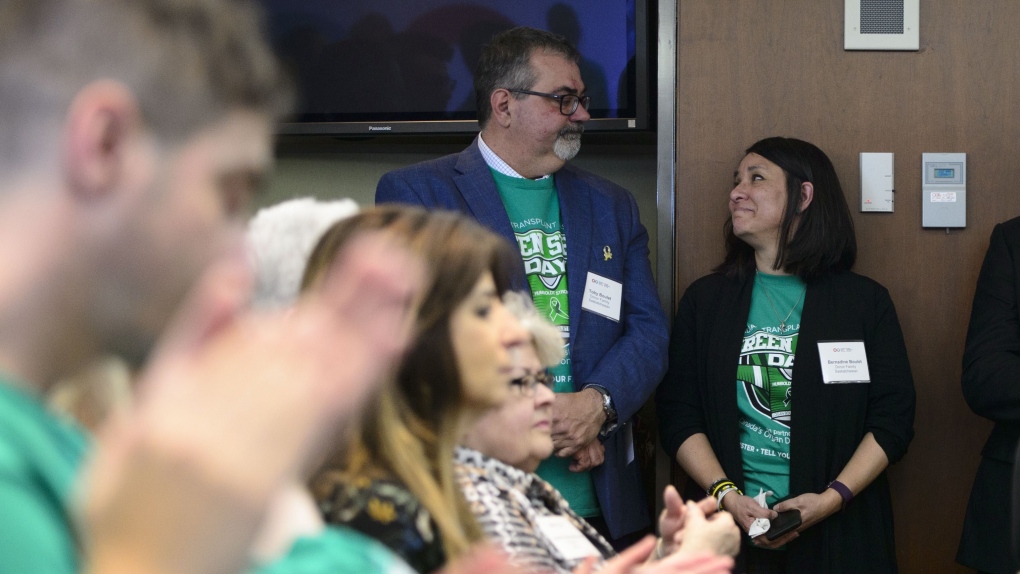 Toby and Bernadine Boulet look at one another as they are recognized during an event for Green Shirt Day and National Organ and Tissue Donation Awareness Week in Ottawa on April 3, 2019. (The Canadian Press/Sean Kilpatrick)

EDMONTON - The father of a Broncos hockey player whose organs were donated after he died in a catastrophic bus crash says a presumed consent bill before the Alberta legislature is a good start but has a long way to go.

“There's way more that needs to be added to the bill,” Toby Boulet said in an interview Monday.

Matthew Jones, a government backbencher, has introduced a private member's bill that would allow organs to be automatically harvested unless a person had opted out while still alive.

Medical officials have long wondered about how to improve the rate of organ donation in Alberta, where the transplant recipient waiting list stands at more than 700. The provincial rate is well below the one-quarter of Canadians who have signed up to donate their organs.

“In Alberta we need to do better,” Boulet says.

Six people benefited from organs harvested from his son, Logan, who was one of 16 people killed when the Humboldt Broncos junior hockey team bus and a transport truck collided in April 2018 at a rural Saskatchewan intersection.

Logan had signed up shortly before to be a donor. Canadian Blood Services estimated that within two months of his death more than 150,000 people registered to pass on their organs. It became known as the Logan Boulet Effect.

Boulet supports the purpose of the bill, which has passed first reading, but he says it could do more harm than good unless there's more work done to back up its intent.

He and his family have become advocates for organ donation. He points out that the percentage of Alberta families who approve an organ donation from a loved one - even if that person has signed a donor card - has declined steeply.

Boulet predicts that would continue if the proposed legislation were to become law, because it includes a way that families could opt out of presumed consent after someone died.

A BBC investigation found that some countries, including France and Brazil, experienced a decline in organ donations after bringing in presumed consent laws.

Awareness and education programs will continue to be necessary if some version of Alberta's bill passes, Boulet suggests.

“There's that education (and) cultural shift that we need and that's not in the bill.”

He says the bill needs other tweaks, including some assurance that doctors would be available everywhere to harvest potentially life-saving organs.

“You need to have surgical teams that are dedicated and ready to go at a moment's notice. We only have that in Calgary and Edmonton.”

As well, many rural hospitals lack the equipment needed to keep donated organs viable until they can be transplanted, Boulet adds.

The bill's biggest failing, he says, is that it can't address people's attitudes.

“It's pretty hard, in my opinion, to tell Albertans to do anything,” says Boulet.

“If you tell someone you're going to have presumed consent in a law, that's not going to go over very well.”

Jones's bill is expected to go to committee, where it may be modified.

This report by The Canadian Press was first published on Nov. 11, 2019.