The head of the Catholic church delivered on Monday an apology to Indigenous people on their own land for its role in Canada's residential schools and the traumas experienced there.

In Treaty 6 territory in Alberta, at the site of one of the country's federally funded church-run schools, Pope Francis spoke to First Nations, Métis and Inuit peoples across Canada.

"I am here because the first step of my penitential pilgrimage among you is that of again asking forgiveness, of telling you once more that I am deeply sorry. Sorry for the ways in which, regrettably, many Christians supported the colonizing mentality of the powers that oppressed the Indigenous peoples. I am sorry," Francis said, referencing the first apology he made to an Indigenous delegation in Rome in April.

Francis spoke in Maskwacis, south of Edmonton, at the site of the former Ermineskin Residential School which operated until 1975.

His remarks lasted about 20 minutes, and were translated from Spanish live.

"I ask forgiveness, in particular, for the ways in which many members of the Church and of religious communities cooperated, not least through their indifference, in projects of cultural destruction and forced assimilation promoted by the governments of that time, which culminated in the system of residential schools," Francis continued.

"Although Christian charity was not absent, and there were many outstanding instances of devotion and care for children, the overall effects of the policies linked to the residential schools were catastrophic. What our Christian faith tells us is that this was a disastrous error, incompatible with the Gospel of Jesus Christ."

Francis repeatedly called the apology, the first event of his Canadian tour, a "first step."

"An important part of this process will be to conduct a serious investigation into the facts of what took place in the past and to assist the survivors of the residential schools to experience healing from the traumas they suffered."

He alluded to the many invites from across Canada he received and will not be able to accept.

"The words that I speak throughout this penitential journey are meant for every native community and person. I embrace all of you with affection," Francis said.

Following his apology, Francis was gifted a traditional headdress.

An estimated 2,000 people, almost all residential school survivors, elders and knowledge keepers, were seated inside the arbour – a gathering area traditionally used for powwow – where Francis spoke. Room was reserved for another 4,000 immediately outside the ring.

During the Pope's remarks, the crowd broke out into applause and cheers three times when Francis asked for Indigenous people's forgiveness, said the residential school system was worthy of an investigation, and was presented with the headdress.

"It was really emotional and I thank him for coming here," one woman who had travelled from North Dakota told CTV News Edmonton. "A lot of times it's hard to say sorry, and I can just feel the healing there."

Both she and a day-school survivor, Anthony Favel, said they were satisfied by Francis' apology.

"I think it was enough. I think it clarified what he wanted to say and it's the first step to reconciliation," Favel commented.

The North Dakota woman added, "His apology was from his heart and it was good."

Connie Jules, a residential school survivor travelled from Kamloops, B.C., to attend the ceremony. She also was part of the delegation that travelled to Rome in March.

She said this was a more comfortable experience than her time in Vatican City.

"It just made me feel like I was going to a bigger residential school," Jules said.

She made the 10-hour trip to Maskwacis with Kúkpi7 Rosanne Casimir — the First Nations chief who invited Pope Francis to the site of the former Kamloops Indian School.

"His words were different, and they seemed more heartfelt (this time)," Jules said.

"And he did address the suffrages. He definitely addressed the traumas that were inflicted and the shame he had for the atrocities that took place," Chief Casimir added.

Some wanted more accountability from the Catholic Church for the wrongs of residential and day schools.

"There could have been more deep, deep discussions about the exact things that happened that nobody wants to talk about," said Eileen Clearsky.

"I want more," said Evelyn Korkmaz, St. Anne Residential School Survivor and advocate. "Fifty years is too long to wait for an apology."

"I think the Pope is genuine, but he has a big institution," Chief Arcand said. "In order for him to move his people and change things, he's got a big challenge."

Pope Francis returned to Edmonton and met parishioners and Indigenous community members at Sacred Heart Church of the First Peoples, where he delivered a discourse on reconciliation.

Bill Perdue and Candida Shepherd, parish council representatives, welcomed the Pope and explained how the parish blends Catholic and Indigenous traditions, and was recently reopened after an accidental fire in 2020.

Shepherd, a Métis Nation of Alberta member, said the parish not only bridges cultures but helps serve those in most need, including homelessness, addiction, and poverty — legacies traced to trauma from colonialism and the residential school system.

"We thank you, Holy Father, for hearing our voices," said Perdue, who has Métis and Irish heritage. "Your presence today gives us the opportunity to confront, to understand, to release, and to transcend our trauma."

The event was invite-only; priority was given to members of the Sacred Heart Urban Indigenous community.

The Pope spoke in Spanish for more than 20 minutes, expressing sorrow for how the residential school system "contributed to assimilation" that "inculcated a sense of inferiority, robbing communities and individuals of their cultural and spiritual identity."

"Education must always start from respect and the promotion of talents already present in individuals," Pope Francis said. "It is not and nor can it ever be something pre-packaged and imposed." 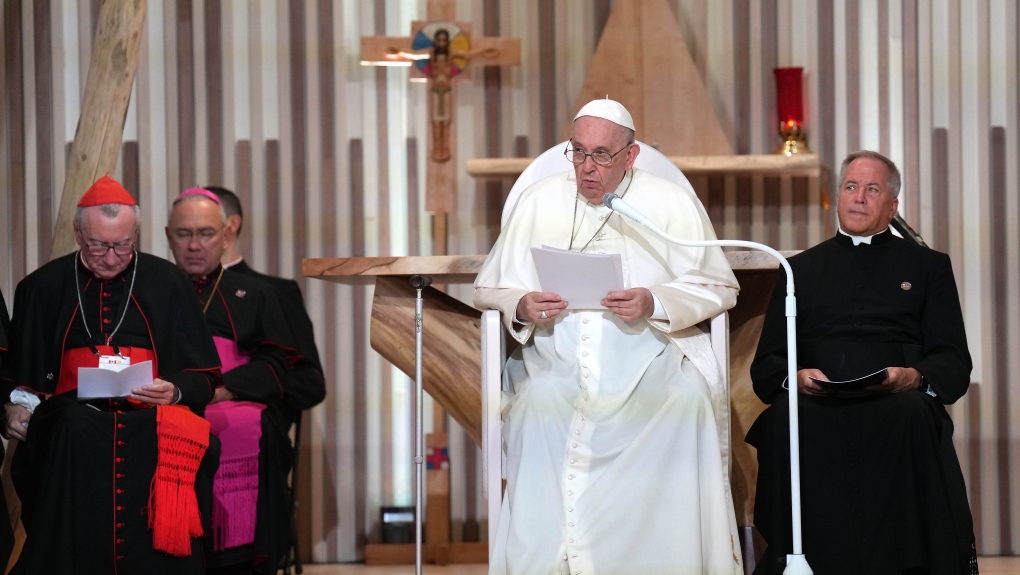 Pope Francis speaks during a service at the Sacred Heart Church of the First Peoples in Edmonton on Monday, July 25, 2022, as part of his papal visit across Canada (The Canadian Press/Nathan Denette).

"If we think of the lasting pain experienced in these places by so many people within ecclesiastic institutions, we feel nothing but anger, shame," he added. "That happened because believers became worldly, and rather than fostering reconciliation, they imposed their own cultural models."

Francis said faith should never have been "drill(ed) into people" and that Sacred Heart Parish demonstrated an example of living in a spirit of reconciliation at a "local level." He added that "healing requires concrete actions."

"We must accept each other's history and culture and allow the mystical aspect of togetherness," he added, "to foster the healing of wounded memories."

Hurricane Ian carved a path of destruction across Florida, trapping people in flooded homes, cutting off the only bridge to a barrier island, damaging a hospital from above and below and knocking out power to 2.5 million people as it dumped rain over a huge area on Thursday.

'Patience is wearing thin,' for Maritimers who question if utilities ready for storms

Some Maritimers who lost power for days after post-tropical storm Fiona are questioning whether power utilities have properly prepared their grids for the powerful storms that are increasingly battering the region.

NATO said Thursday it would retaliate for any attacks on the critical infrastructure of the 30-member-countries organization as it suggested that damage to two gas pipelines off Denmark and would-be member Sweden in international waters in the Baltic Sea is the result of sabotage.

Russia will annex 4 regions of Ukraine on Friday

Russia on Friday will formally annex occupied parts of Ukraine where it held Kremlin-orchestrated "referendums" in which it claimed that residents had voted overwhelmingly to live under Moscow's rule. The Ukrainian government and the West have denounced the ballots as illegal, forced and rigged.

The Canadian economy grew slightly in July with the latest reading on real gross domestic product coming in higher than expected.

Canadians in Florida hunkering down as hurricane Ian lashes the state

Canadians in Florida are hunkering down as the massive Category 4 storm lashes the southwest coast with heavy winds and rain.