Madu tried to 'interfere in the administration of justice,' but failed: Kent Report

MLA Kaycee Madu lost his job as Alberta's justice minister Friday after an investigation found he tried to "interfere in the administration of justice," and he was immediately appointed as the new minister of labour and immigration.

Madu, who represents Edmonton-South West for the United Conservative Party, was asked to "step back" in January after it became public that he called Edmonton Police Service Chief Dale McFee the day he got a distracted driving ticket in March 2021.

A 15-page-report into that call, written by former Court of Queen’s Bench Justice Adèle Kent, made three conclusions: that Madu tried to interfere in the "administration of justice," but he did not succeed, and that there was a "reasonable perception" that he did interfere.

"There is a process that the minister knows well to address questions of police conduct. It does not start with a phone call to the chief of police," Kent decided.

"The minister of justice cannot phone the chief of police to discuss his traffic ticket."

Premier Jason Kenney agreed that Madu should not have called McFee, but he also thanked the MLA as he announced his new role.

“The report concludes that Minister Madu did not interfere in the administration of justice but that the phone call could create a reasonable perception of interference," Kenney was quoted as saying in a Friday afternoon news release.

“I would like to thank Minister Madu for his critical work in addressing racism in Alberta’s justice system and for ending police carding in Alberta. I know that he will continue to be a strong advocate for equality of opportunity."

The government made the Kent Report public and announced the cabinet shuffle just after 3 p.m. Kenney finished taking questions from journalists at a hospital announcement in Calgary at 2:36 p.m.

'THIS IS INCREDIBLY SERIOUS'

"It is totally unacceptable for Kaycee Madu to remain in the UCP cabinet given the conclusions of Justice Kent’s report," NDP MLA Irfan Sabir tweeted.

"This is incredibly serious. It undermines the separation between political leadership and law enforcement that is fundamental to a free democratic society," NDP Leader Rachel Notley tweeted. "The minister cannot remain in cabinet."

The name of the officer that pulled Madu over was redacted from the report, but it said Madu told him he was the justice minister "at least four times" during the stop.

McFee previously confirmed that Madu did not ask to have the ticket torn up, nor did he ask to have the officer that wrote it punished. Madu declined to comment on whether he thought the call was appropriate or not.

McFee told Madu he had two options: pay the ticket or go to court, the report said.

Madu initially claimed that he called because he was concerned he was being followed because he's Black, and he referred to a case where an NDP MLA was followed by police officers in Lethbridge. 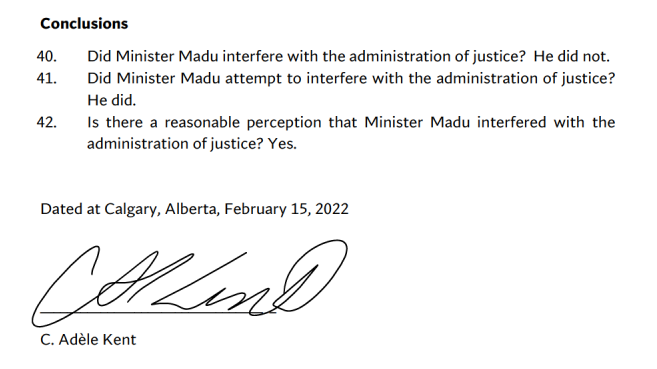 The conclusions in the Kent Report released publicly on Feb. 25, 2022.

"Being angry, wanting assurances that he was not racially profiled are all understandable reactions, given the context of the phone call. It does not absolve the minister from responsibility, but it is an explanation that deserves recognition," Kent wrote in her report, concluding Madu was not profiled.

Madu did not immediately release a statement and his Twitter bio still referred to him as the Minister of Justice and Solicitor General on Friday afternoon.