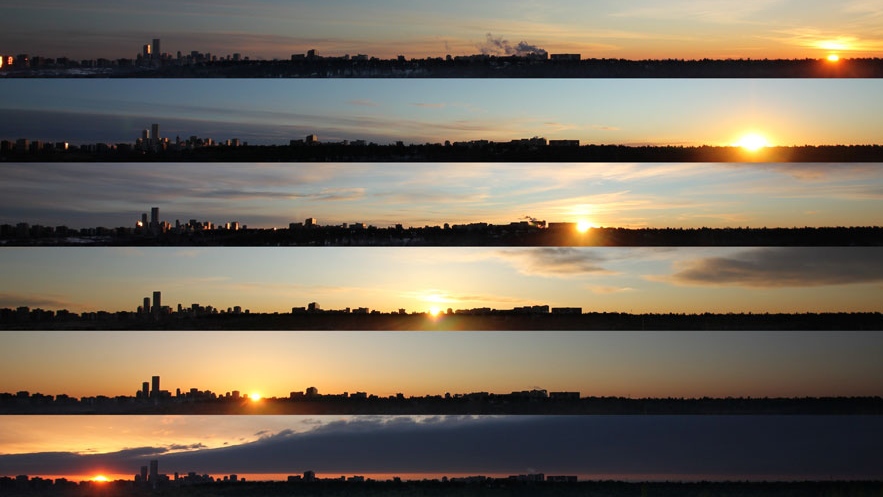 An Edmonton man who photographs the skies for fun had his work published by NASA on Wednesday.

Through snow and cold, a wicked heatwave and wildfire smoke, Luca Vanzella spent many of his 2021 mornings shooting the sunrise from the exact same place in west Edmonton.

He then stacked 13 of his best images from each month on top of each other, to show how the sunrise slowly dances across Edmonton's skyline throughout the year.

"The earth's tilt of its rotational axis compared to the plane of the solar system is what causes the movement of the sun along the horizon," Vanzella explained.

"It generally rises in the east and sets in the west, but it's not always due east. As we in Edmonton know well, in winter it rises southeast and in the middle of the summer it rises northeast."

Vanzella's work was featured as NASA's Astronomy Picture of the Day for Jan. 5, the fourth time one of his photos was shared by the space agency.

He said his projects are mostly for his own enjoyment, but he's happy to share it and inspire others to shoot their own skyscapes.

"It was nice to have projects like this to look forward to keep doing during the pandemic. It was really unaffected by the pandemic," Vanzella said.

"In fact, this morning I got a request from a planetarium in the Czech Republic that wants to use the photo for educational purposes. It is pretty cool."