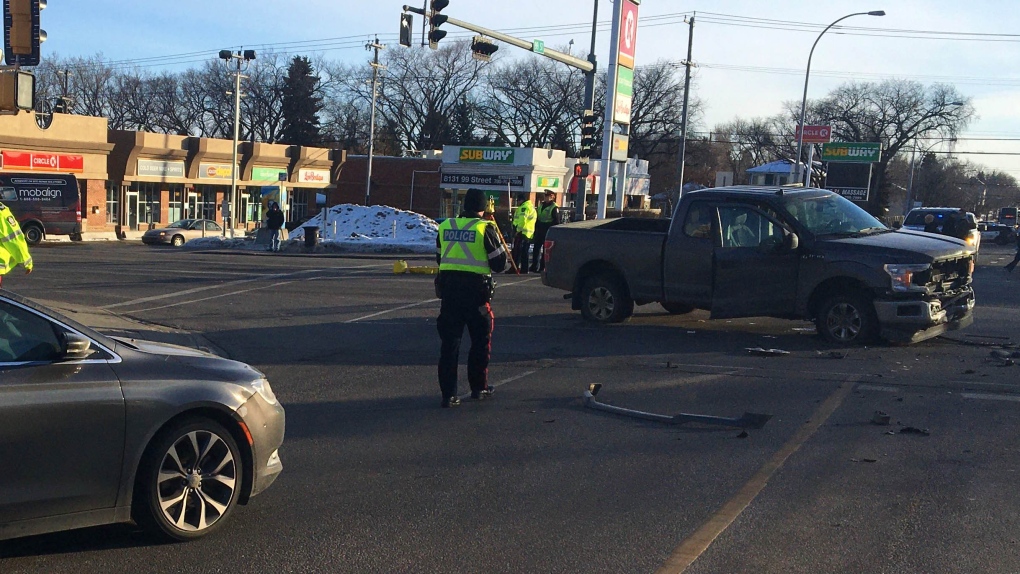 The westbound lanes at Whyte Avenue and 99 Street will be closed during Monday's afternoon commute after a crash. Feb. 10, 2020. (John Hanson/CTV News Edmonton)

EDMONTON -- A police chase that started outside Edmonton city limits resulted in a three-vehicle collision that injured one driver on Whyte Avenue Monday afternoon.

RCMP and Edmonton Police Service began to chase a vehicle that was stolen in the Leduc or Wetaskiwin area at approximately 2 p.m., an EPS spokesperson told CTV News.

According to RCMP, the vehicle was stolen and had been spotted in Wetaskiwin shortly after noon. RCMP followed it through Maskwacis to Leduc, where police tried to stop it at a gas station. However, the driver of the vehicle rammed an RCMP unit and fled into Edmonton.

EPS said the driver of the stolen vehicle was "driving erratically" through the city before colliding with two other vehicles at the intersection of 99 Street and Whyte Avenue.

The crash involved a pickup truck, a car and a van. The truck has heavy front-end damage and flat tires on its passenger side.

The driver of the van told CTV News she was travelling north on 99 Street when the pickup truck heading west on 82 Avenue struck her.

"The truck and the car hit my vehicle," Bianca Callihoo said. "The truck was on a high-speed chase I guess and got spiked three times and hit our vehicles."

The driver of the car was taken to hospital with minor injuries, police said.

The occupants of the stolen vehicle attempted to flee on foot but were arrested. RCMP said a female was also taken into custody from the Leduc gas station.

The westbound lanes at 99 Street and Whyte Avenue were closed as police investigated the crash.