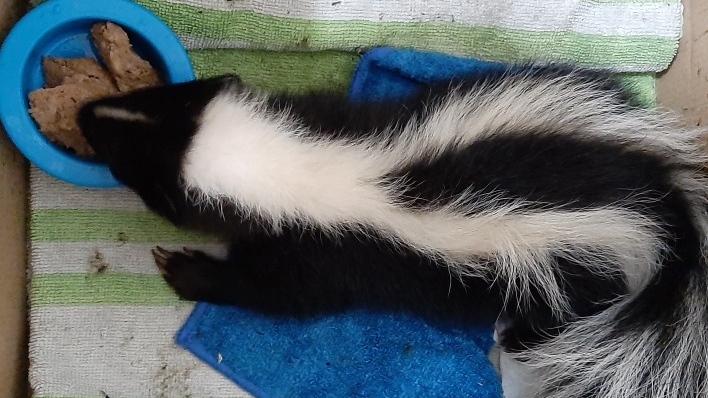 The Medicine River Wildlife Centre rescued two skunks on Friday, which it suspects were brought to the river to be drowned.

The Medicine River Wildlife Centre were called to the banks of the Red Deer River on Friday after reports of two skunks in distress.

When centre officials arrived, they found one skunk that was stuck and another that appeared dead.

The first skunk was freed and it quickly ran away. However, when the wildlife centre staff took a closer look at the second skunk, they realized it was still breathing and took it in for further treatment.

It has since been released back into the wild.

The centre said someone may have tried drowning the animals.

“To find these two caught and tangled on the edge of the river like that was kind of suspicious because skunks wouldn’t go towards a river very much. We are suspicious but we can’t guarantee it for sure,” said Medicine River Wildlife Centre Executive Director Carol Kelly.

Kelly added the centre has heard of people trying to trap and drown skunks before.

According to Kelly, skunks like to dig under sheds and mobile homes, and are attracted to garbage, fruit trees and pet food; this has led to an increase in skunk issues in the area.

“Any animal that has an abundance of food and shelter will have more babies,” Kelly said. “The cleaner we are, the more aware we are of our buildings, the less skunks we’re going to have.”

The wildlife centre urges anyone who is having issues with skunks to give them a call so they can advise people on how to safely remove the animal themselves, or so the centre can come in and remove it.