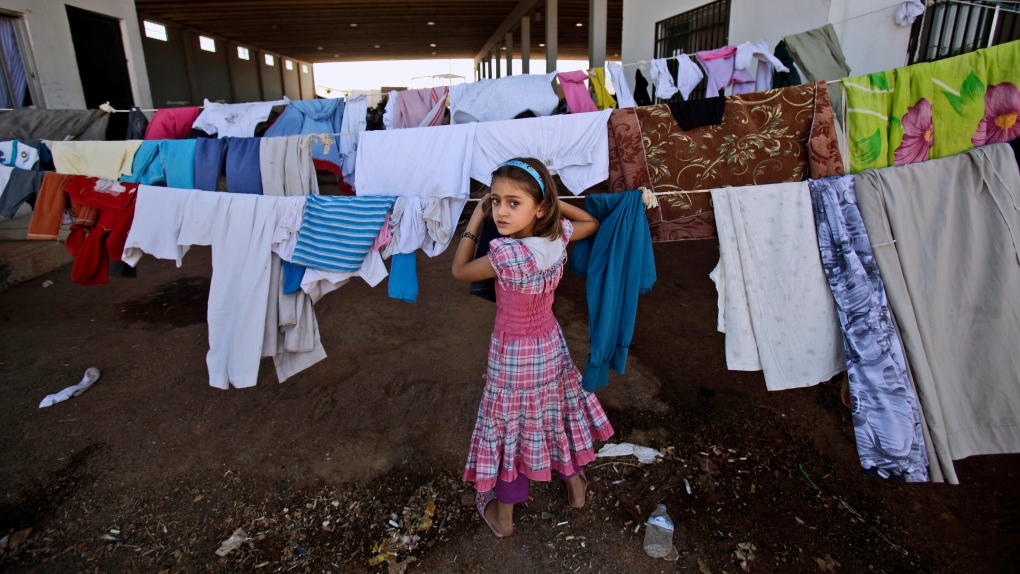 A Syrian girl, who fled her home with her family due to fighting between the Syrian army and the rebels, looks back while checking her laundry, as she and others take refuge at the Bab Al-Salameh border crossing, in hopes of entering one of the refugee camps in Turkey, near the Syrian town of Azaz, Sunday, Aug. 26, 2012. (AP / Muhammed Muheisen)

ANKARA, Turkey -- Some 10,000 Syrian refugees are waiting on the Syrian side of the border as Turkey rushes to build more camps to accommodate the influx and carries out more stringent security checks on the newcomers, Turkish officials said Monday.

The developments underscore the growing toll Syria's civil war is having on neighbouring countries, several of which have seen a massive flow of Syrians trying to escape the conflict which activists estimate has killed more than 20,000 people since March of last year.

Turkey has so far taken in more than 80,000 Syrians, and all nine Turkish refugee camps along the border are full. Until recently, newcomers were being housed in schools, dormitories or sports centers near the border while Turkish authorities scamper to construct four new camps that will increase Turkey's capacity to 100,000 refugees.

The refugees still stuck on the Syrian side will be allowed in "within a day or two" when a new camp near the border becomes operational, a Turkish official said, adding that Turkey's Red Crescent organization was providing emergency aid to the refugees as they wait to cross into Turkey.

Another official said Turkey was also carrying out more stringent security checks on the refugees, adding to the delay in bringing them across the border. The tighter checks come amid Turkish fears that Kurdish rebels fighting for self-rule in southeast Turkey may be coming in through Syria. There are also concerns that foreign jihadists are moving in and out of Turkey to fight the Syrian regime.

The officials spoke on condition of anonymity because of government rules that bar civil servants from speaking to the media without prior authorization.

Turkey's foreign minister, Ahmet Davutoglu, has said the United Nations should establish refugee camps inside Syria and that his country would struggle to cope if the refugee numbers rise substantially.

"Turkey is carrying out its humanitarian duties toward the Syrian people with whom it has historic brotherly ties," Davutoglu said Monday. "On the other hand, the increasing numbers are becoming an encumbrance. The international community must help share this burden."

Unal was working as a cameraman for the U.S.-funded al-Hurra network when he and a colleague, Bashar Fahmi, were believed to have been captured while covering fighting in the northern Syrian city of Aleppo a week ago. The cameraman, seen with bruises under his eyes, says he crossed into Syria with foreign militants and one image shows him holding a weapon.

Davutoglu said Monday the journalist was coerced into making a statement and that Syria was responsible for his well-being.