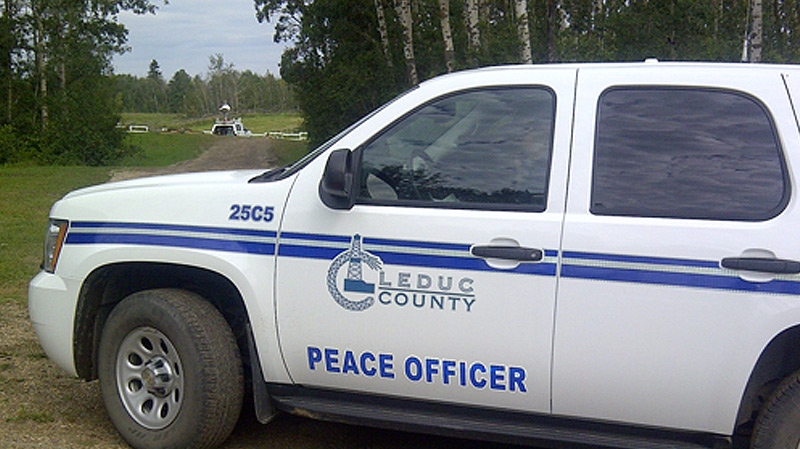 A Leduc County peace officer vehicle is parked near the location where the Mad Hatter Music Festival on Thursday, August 23 was to be held near Leduc, Alberta.

A day after the Madhatter Music Festival in the Leduc area ended – in defiance of warnings from Leduc County – festival organizers could face thousands of dollars in fines.

On Monday, Leduc County said significant resources were tied up over the weekend – as county peace officers and RCMP had to monitor activities at the festival while organizers defied a stop order and safety warning from the county last week.

So far, two $500 tickets have been handed to festival organizers for safety code violations – and more charges and fines were to be issued Monday.

RCMP said eight more complaints were received after the charges were laid on Saturday.

In addition, the county said on Saturday, Leduc County Safety code officials inspected the site of the festival – which was held over the weekend on private property – and issued a notice of non-compliance.

If they’re given the maximum penalty, organizers could face up to $15,000 – plus $1,000 for each day the festival continued after the inspection.

The county said all fines will go to cover the costs of monitoring the festival.

Officials started issuing fines after issuing a stop-order to organizers Thursday, on the first day of the festival.

Despite the order, the festival organizers kept the four-day festival open – and claimed they would hold a responsible and safe festival.

The stop-order was issued a day after the county went public with concerns, after organizers failed to meet safety requirements set out by the county.

While officials admitted they couldn’t cancel the festival, the permit for the event was denied.