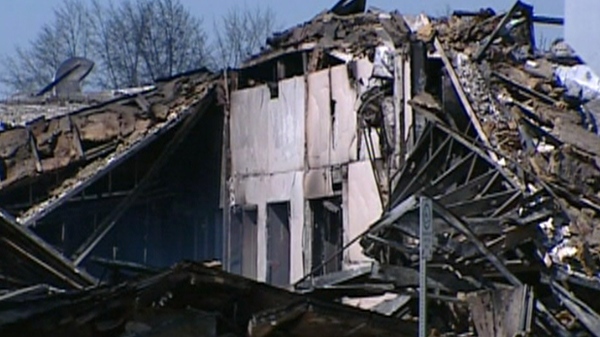 Many residents of Slave Lake are worried because they don't know whether they have lost their homes, Wednesday, May 18, 2011.

Tuesday marks the one year anniversary of a devastating wildfire that destroyed one-third of the northern Alberta town of Slave Lake.

The flames wiped out nearly 400 buildings including homes and businesses. It forced an evacuation of 7,000 Slave Lake and area residents and left 2,000 homeless.

The wildfire caused $700 million in damage, making it the second-costliest disaster in Canada, only second to the 1998 Quebec ice storm.

But since that day, the community has been rebuilding.

These are words being used to describe the people of Slave Lake, who have, with their town, risen from the ashes.

About 21 new homes have been rebuilt and construction permits have been issued for another 200.

"I think we're going to see in five years, [we're] fully developed back and better than Slave Lake ever was," said Mitch Carriere, one of the firefighters who battled the flames in Slave Lake last year.

"The town hall, you know, we lost that. It was the centerpiece of the community and we lost it. It's being rebuilt."

Carriere has since moved to Cochrane, Alta., but will never forget what happened in Slave Lake.

"Everywhere I looked around, buildings were on fire."

"It was just a fire storm coming towards the town and we weren't sure how we were going to stop it," recalls Danny Schmode, a veteran volunteer firefighter in Slave Lake.

While some progress has been made, many of those affected by the wildfire continue to struggle today.

Hundreds are still living in temporary homes, many are fighting with insurance companies and some are waiting for builders to begin the construction process.

The town has been bringing in speakers each month since the disaster to talk to residents about mental and physical wellness in an effort to help those affected cope and move on.

"It's not going to happen overnight," Schmode says.

"It's going to take years before everything is back to as normal as it can be."

The wildfire threat level for the region is listed as extreme. The area is very dry again this season, and there have already been a number of fires.

But the volunteer fire department has added more equipment to its arsenal since the wildfire.

And Slave Lake Mayor Karina Pillay-Kinnee says the town is now better prepared to combat a fire of that scale.

The town is marking the one year anniversary with the theme ‘One Year Stronger.'

A number of activities are being held to mark the anniversary and celebrate rebuilding efforts that have been achieved throughout the year.

On May 13 at 6:30 p.m., CTV Edmonton and Calgary are paying tribute to the men and women who battled to save the town in a half-hour special "Wildfire: Heroes of Slave Lake."

It chronicles the efforts of the brave men and women who stayed behind to help evacuate residents, battle the flames and defend their town, told exclusively through the words of those directly involved.

With files from Bill Fortier and The Canadian Press