'We’re not stopping the rallies and the protests': Hundreds gather, rallying in support of Palestinians

EDMONTON -- Around a thousand people gathered in Hawrelak Park Sunday to stand in solidarity with Palestinians.

A ceasefire between Hamas and Israel has been holding for the past three days.

“We’re very happy for the ceasefire, but at the same time people need to understand that a ceasefire for Palestinians just means maintaining the status quo, which is living in an apartheid state… the Indigenous people being ethnically cleansed from their land,” said Mousa Qasqas with the Canada Palestinian Cultural Association.

“That’s why we’re not stopping the rallies and the protests… because they’re still living under occupation.”

Protestors formed a human chain, calling for an end to suffering in the Middle East.

“I want everybody to be happy, live in peace… nobody should be dying,” said Linda Huoseh, one of the protestors.

This isn’t the first large-scale rally supporting Palestinians in Edmonton in the past week. People from all walks of life have been out offering support, according to Qasqas.

“There’s been so much outreach from the community saying, ‘We want more, we want to hold our politicians accountable.’”

For too long, the voices of Palestinians have been ignored, according to protestor Nedal Huoseh.

“There’s a lot of censorship and the censorship needs to stop,” said Huoseh. “This new generation, they’re more open-minded to learning about what’s going on."

He said social media has helped raise awareness, but it isn’t always enough.

Protestors and Sunday’s rally released 63 balloons into the sky, one for each child killed in Gaza in the past two weeks.

Over 250 people, mostly Palestinians, were killed during the 11-day war.

“I think it’s about time people take change into their own hands and make sure that the impact is actually being shown to the whole world, that people are not going to stand for this kind of hatred anymore,” said Micheline Kashiku, another protestor. 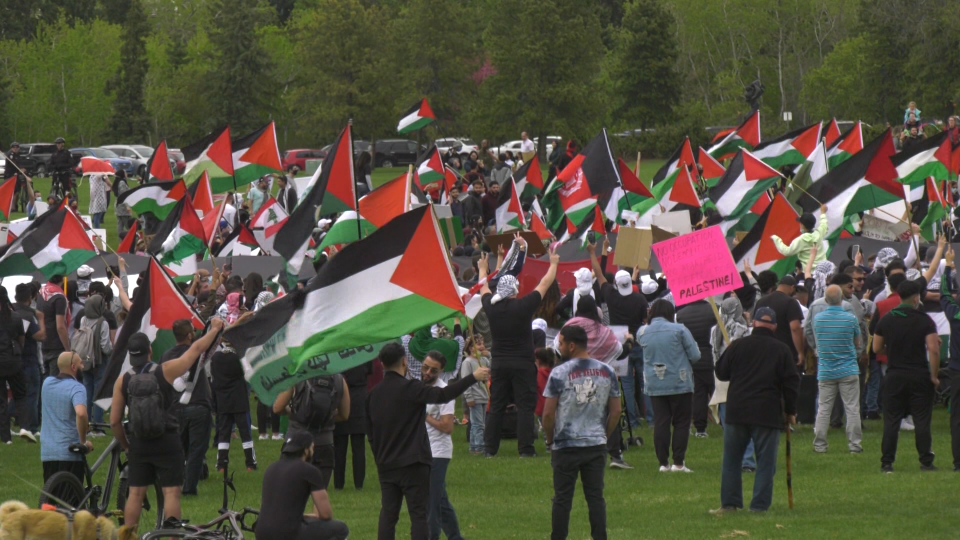 Edmonton police said in the past week they were investigating two reports of anti-Semitism, though it was unknown if the people involved were connected to previous rallies.

“We condemn anti-Semitism in the strongest way we can, people need to understand you can criticize Israel without being anti-Semitic,” said Qasqas.