EDMONTON -- A new scanner could be coming to some Alberta seniors’ homes to help protect residents from people who might be carrying infectious diseases.

A thermal scanner has been placed at Aster Gardens in Sherwood Park, the first of its kind in Canada. It’s a piece of technology manufactured by Calgary-based Connectus, originally designed to help pro-sports teams screen personnel.

“It would allow us to do a much more thorough scan and recognize who might be asymptomatic, or may not know they are carrying the disease to be identified,” Karen Fitzgerald, general manager of Aster Gardens, said.

According to Fitzgerald, for every person who goes through the device it works out to be roughly $1.50 per person to operate.

“COVID-19 has hit the seniors the hardest,” she said.

“We have to be diligent and do everything we can to keep them safe.”

A resident of Aster Gardens, Eugenia Stocki moved into the facility on March 26 with her husband Forest. She said “it’s very good” to have the state of the art technology in the building.

“It gives the community, plus the residents here that extra little, ‘OK, they’re going to catch it before we get to see the people.’”

Eugenia and Forest haven’t seen their kids since the pandemic began as they live outside the province.

“It’s been really hard,” Eugenia said. “But, you do what you have to.”

“The only thing I am disappointed in, in Albertans, is that they think that wearing a mask is not necessary. It is very necessary. Everybody should be taking all precautions,” she added. 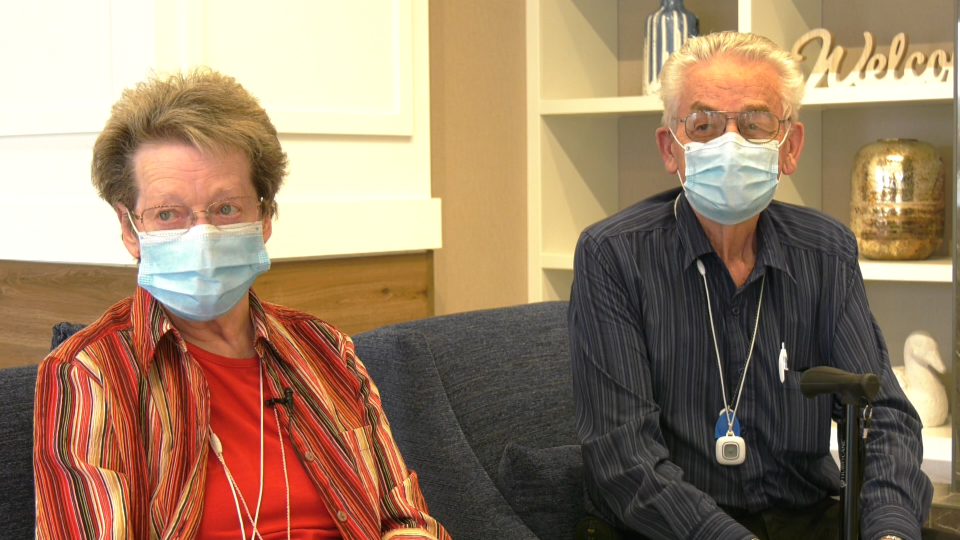 In fact, Fitzgerald told CTV News Edmonton residents had an internal vote on whether or not they would allow indoor social visits. The vote was overwhelmingly no, even though provincial guidelines allow up to four contacts.

“Within our facility we have life happening,” Fitzgerald said. “There are things you can do, people you can be with you’re not alone, you’re not isolated so that helps with you mental health.

“If you were ever to get sick we have resources here that can care for you as well.”

The building opened in March after months of design adjustments influenced by the pandemic. Those included increased sanitation, low touch appliances, and improved ventilation in the rooms.

“Should we ever have an airborne infection, each unit has its own air exchange unit so you’re not sharing air within the building,” Fitzgerald said.

“Everything we do here is geared to keep you safe.”

Apartments at Aster Gardens go for about $3,000 to $6,000 a month, prices the residents are willing to pay for the added level of protection.

“We felt it was a very good choice for us,” Eugenia added.